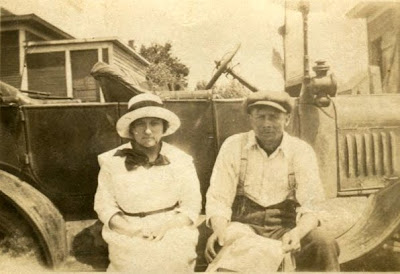 Weaver is the oldest brother of my Grandmother Mabel Zella Wheeler Brown Brooks.  I don't know the date of the photo above but I do know they were married around 1914 and they were both young when they married.  He was born in the Lorimor, Iowa area south of Winterset. I believe that he was one of four boys and my grandmother was the only girl.  Someday I will tell you the parents name, but that has not been found yet among all the things. Weaver was my Great Uncle. 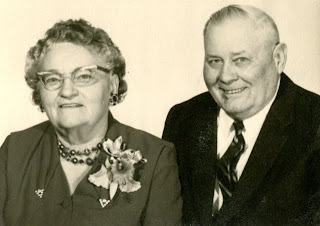 I don't know this as a fact, but I am think this is their 50th wedding anniversary, in 1964.  It is written on the back that he is 69 years old, which meant that he was 19 when they married.  She is 65 in this photo which made her 15 maybe going on 16 years old when they married.
They were always called the Hardin County relatives, as they lived in that country near Iowa Falls, Iowa.  He was at first a farmer, but eventually made his fortune investing in houses to rent to Junior College students who went to school in the town.  They lived in Iowa Falls in very cramped quarters in their house as they rented two rooms upstairs to students also.
Weaver and Ellen had two daughters,  Veda and Darlene.  Veda didn't live in the area in later years and  Darlene lived in Iowa Falls with her husband Ed and their two children. 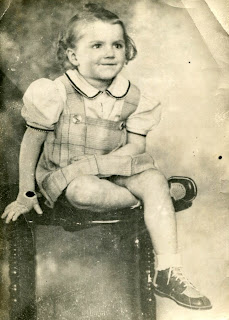 The photos at right are either granddaughters to Ellen and Weaver, or the are their daughters.  I need to research this more to be sure. 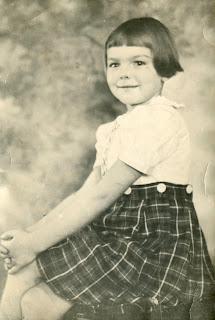 Because of this blog, I am finding new things each week. I am frustrated with it because I don't have the people to ask, but I do find that if I dig through the papers and the letters and the funeral cards that I will get it all figured out.

Check out the blogs from around the world who are also participating in Sepia Saturday by clicking here.

Through my wife's computer I am letting you know that I have to buy a new computer. I am down. I don't want to disturb her things so I will be off line for awhile until I decide what to do.  I am busy using an extra screen to save all my photos and documents.
Posted by L. D. at 11:18 AM 18 comments: 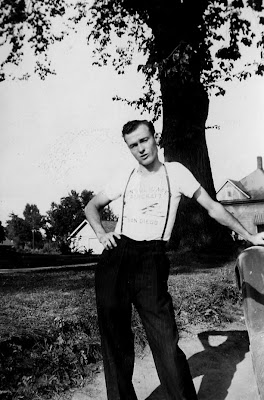 My mother had two older brothers.  This is her younger brother Kenneth Brown.  He was born in 1917 in Madison County, Iowa to the parents of Leroy and Mabel Brown. He is living in Murray, Iowa living an active life of helping boss a woman who is remodeling houses in the town, one house at a time.  I use the word boss lightly as they are a working friendship and she does most of the work, or hire's it out and he is there to give her advice and ask questions.  He is 93 and she is probably thirty years younger. Before he retired, he had been a farmer and then worked for a business as a salesperson for a Farm and Home business.


Of the two brothers of my mom's, Kenny is probably the closest to being like my Grandmother.  When I talked to him on the phone the other day, all of his verbal phrasing and voice reminded me of her. He also has an easy going attitude about life and you can tell that is some of his pictures that I am going to show you. 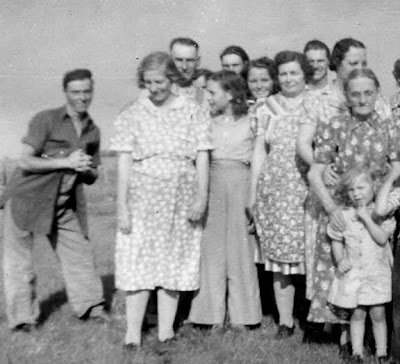 Here is a partial section of a family reunion and the guy clowning around is my Uncle Kenny.  I assume this was taken in the 1930's. 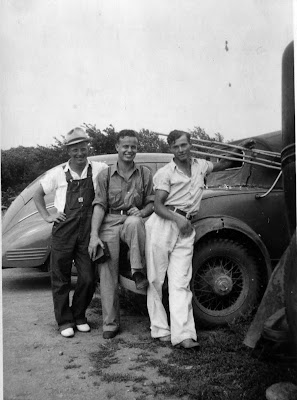 This is my favorite photo of all times.  Is this not cool?  I have no idea who the two guys on the left are but Kenneth Brown is leaning with the attitude dressed in the light clothes. If you can date American cars you can date this photo for me. 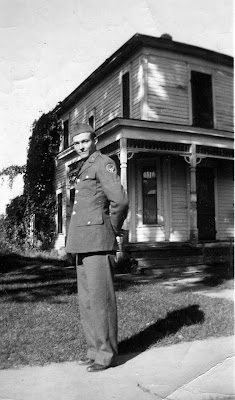 Kenneth was married to Sylvia and had three boys, Bob, Don and Gene Brown. I grew up with them as they were similar in age to my brother older than me and myself. His youngest son lives in Murray near his dad and I see him often. The two older sons migrated to the Chicago area working for the phone company.

His life now is a well deserved reward as he drives to a nearby town everyday for breakfast and he hangs out with the home restorer, giving advice and just watching. He is the last of my mom's generation and it is so nice to still have contact with him.

This last photo was of him in his Army uniform.  He went into the service at the same time as my dad in 1941.

For some reason I could not turn these into sepia without loosing contrast and detail. Good old black and whites are ok.

Check out all of my friends from all over the world, who are posting family pictures and stories on SEPIA SATURDAY,  by clicking here.
Posted by L. D. at 4:52 PM 20 comments: 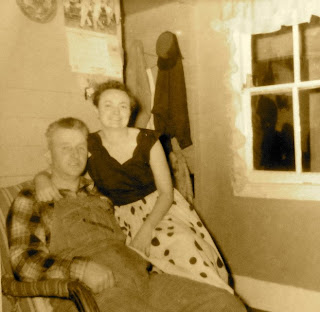 As I search through the piles, I found this photo of my Dad and Mom, Jesse and Zella Burgus. They were age 41 and 40 in this picture. It was taken in the old house, that stood on the farm when they bought the farm in 1953.  The house was an old T shaped farm house, with two stories.  The one end was probably the first part of the house to be built as the one room kitchen had a six and a half foot ceiling in it.  Above that kitchen was a single bedroom.  I believe the next two story wing with normal ceiling heights was built later.
The photo was developed in November of 1959.   They are sitting in the  north end of the kitchen next to a doorway that takes one upstairs.  The window looks out to porch with square columns. 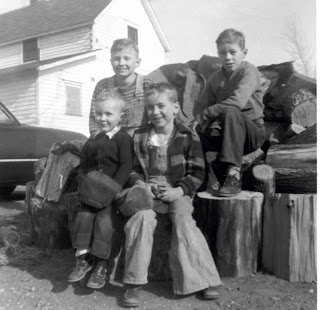 Here is a picture of the house.  They were called a story and a half. The edges of the sides of the rooms upstairs were all 4 or 5 feet tall and the roof slanted in as a part of the ceiling. I have posted this photo before but the boys are of myself and brother Dwight in the front row. I am the youngest. Behind us is Rex and Ron.
The house was torn down in 1959, in the spring after the crop was put in, and a new ranch house was put up in it's place.  My folks picture was taken apparently in the winter before the house was to be torn down. 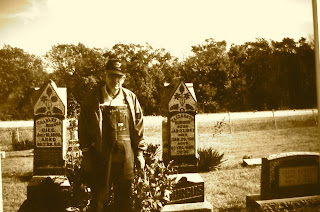 Here is a photo of my dad almost forty years later.  He is standing in the Union Cemetery located in southern Iowa north of the town of Murray. Around him are all stones of the relatives.  The standing stones behind him are my Great Grandparents graves.  I do now have to go there and visit as I don't know any of the other stones.  My Great Grandfather had 13 other brothers and sisters and I bet a lot of them are right there also.  The families of Burgus, Abernathy,  and Turner all lived in the area and attended a Union Community Church.  A lot of those names were leaders in the little church and all three of those families are my relatives.  The name Burgus survived as they married Abernathys and Turners. 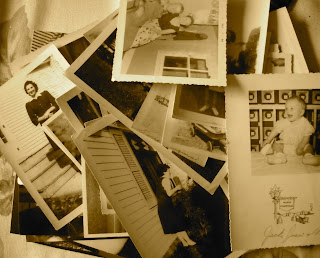 I am not an only child but I sometimes feel that way as my two older brothers live in the classy states of California and Arizona.  The other brother died a year ago and I have all these photos.  I found this batch yesterday and am starting to sort and store in photo boxes.  It is hard as I don't know who will ever care to have them when I am done.  As for my own satisfaction of knowing the family tree, I will trudge on to victory.  It will be a few years before I have them sorted but it will be a fun journey.

CHECK OUT ALL THE OTHER PARTICIPANTS IN SEPIA FROM ALL OVER THE WORLD. GOOD FRIENDS OF MINE SEEKING TO SHARE THEIR OWN FAMILY TREES. CLICK HERE.
Posted by L. D. at 2:41 PM 15 comments: