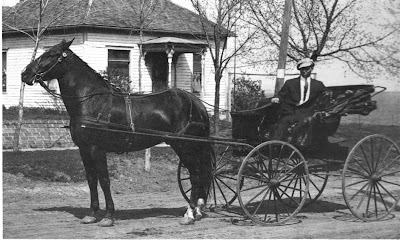 Granger, Iowa celebrated it's centennial back in 1984.  That means the town is now 128 years old.  It isn't a large town but it's early history included Italian coal miners living in the area. The agricultural influence on the area helped to feed the country.

While reviewing the Granger Centennial Book of 1984 I notice a theme of horse power being critical for the development of the area.  A horse and buggy would get you to wherever you needed to go on the dirt roads of the area.  Des Moines is thirty or more miles to the south so local grocery stores, doctors, and lumber yards kept the locals buying locally.

It really would be worth you while to click on the photos to see them in the larger format. There is a lot more to see of the history of Iowa when you do so. 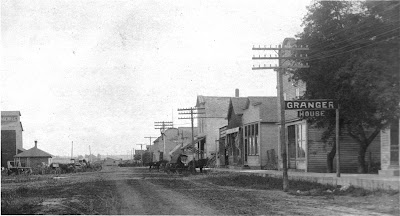 Downtown Granger with it's dirt streets has electric wires down the streets.  I don't know it they are power lines also. This had to have been in the early 1900's. I like how the horse and buggies are pulled up in front of the businesses just like model T's would eventually have done. 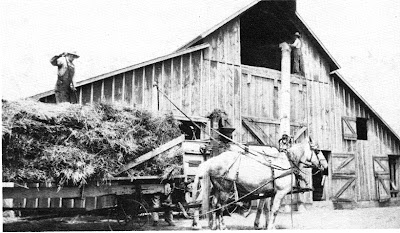 Horses were essential to bring in the harvest from the fields.  Work back then was just as hard but its pace had to be different as the work was more extensive and slow.  Pitching bales of straw were slow when you were not using machinery to bring in the crop. 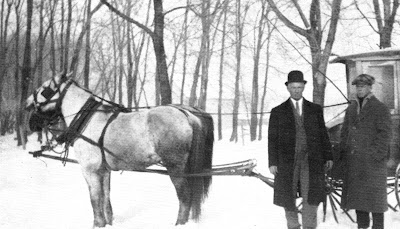 Covered carriages were a welcomed luxury with snow on the ground.  This looks like a scene at a country homestead as the grove of trees reminds me of a country area. I am sure a country doctor would have to depend on his horse and buggy to take him to the sick.

Riding behind the mower or binder was hot work and I am sure a rough ride with metal wheels.  A straw hat was mandatory in the summer heat of Iowa.
town consolidated it's school with Granger in 1976 so as I was hired to work for the two schools, I felt I was just as much a part of Granger as I was with the town of Woodward in which I lived.  The family histories of the people are all the grandparents of the parents of the children that I taught in Granger so as I go through the Granger Centennial Book I do know most of the names.
I have more to blog about with this town as it had a circus that wintered near the town and the very first government housing program happened in the Granger area.  I also have some school building history to share.  They were a part of our inter urban train line that connected to Des Moines.

Follow others today who are participating in Sepia Saturday.  They are from all across the world and have interesting photos and thoughts about the time and event of their postings.  Click here on Sepia Saturday.