The Knowns and the Unknowns 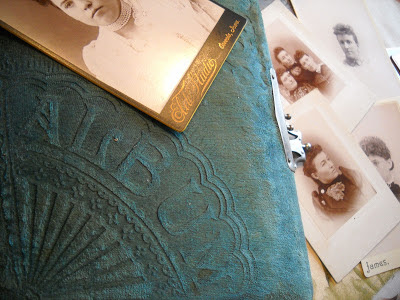 The past few years I have been exploring two old albums that my dad had rescued from a house that he was tearing down.  The albums are of relatives of the family that had lived there. but the family that lived there is a mystery itself.  The house had been abandoned 16-20 years maybe even longer.

The photos are of ancestors I believe of the family. I did disccover items that told me those who lived in the house were related to the Websters that owned the funeral home in Osceola, Iowa. The wife could have been a sister or a daughter from the Webster family.  But actual names that I have found on photographs do not help me out much.  We all know that the family tree extends forever.  The albums could be from in-laws a couple of generations back.  The questions I still have are unanswered so the two albums are still full of unknowns.

The couple are dressed in garments that remind me of my grandparents wedding photo. It has to be in the late 1800s. 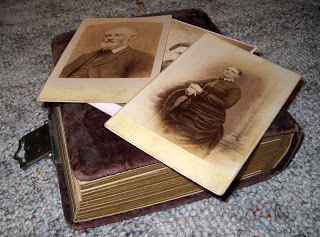 They are all wonderful photos and the clothing of the day does give me a little bit of an indication of the time period.  I am not very good at dating them like some of my blog friends are but I am certain we are in the middle of the 1800's for sure and then on into the early turn of the 1900's. When I think about it the albums are old so when you see older people in the photos that makes them at least a half generation older than the others in the books. 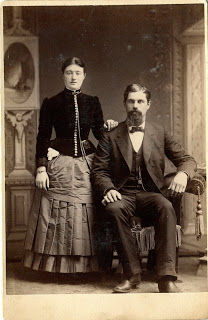 The backgrounds of the unknowns are sometimes fancy murals and they pose their people on fancy furniture.  I have other photos of this guy who is standing in uniform for a lodge picture. 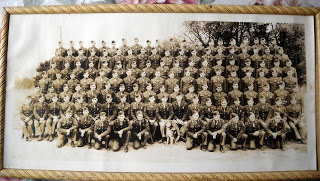 Moving away from the album collection I have another one of my unknowns. This group shot of my father's company that he was place in when he was in the Washington D.C. area.  My father is in the photo but look at all the other families that are represented in the photo.  My dad did eventually get sent over seas and he did return as a survival of the Battle of the Bulge. 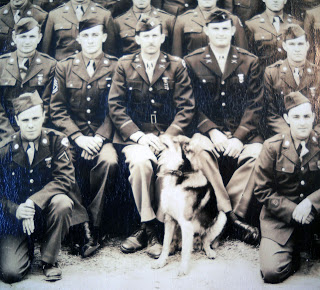 A point of interest to me was the mascot dog that was in the photo.  The guy either is petting the German shepherd or he is protecting his eyes for the camera flash.  Unknowns who are ranked higher than my father were all sitting in the front center. Most all of these men would be in their upper 80's and 90's if there are still alive. 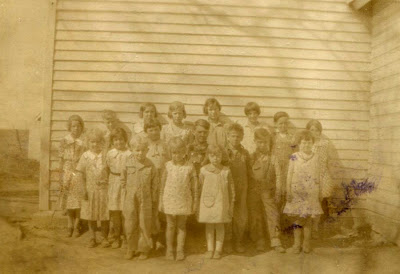 I found this mystery photo among my mom's photos and all is unknown to me.  I did see that there is an outhouse in the background so it must be a school photo. My mom could of been the teacher at this school but I don't really think so. She taught in 1937- 40.  I can't believe that the photo from that era would be that aged and yellowed from that time.

The students are all lined up showing the population to be very much farm children and their ages really don't seem to be too spread out for kindergarten through eighth grade. One guy in the middle looks older as if he is standing on his knees.  I wonder if my mom and her two brothers are in the photo, which would have been in the 1920-30s,  but I just don't know.

Visit others who are sharing in the posting of blogs on Sepia Saturday Unknowns can be seen by clicking here.

I looked into my past posts and found that I started Sepia Saturday on February6, 2010.  I have been busy the past year and haven't blog regularly, but it still has been my pleasure to be included in such a creative and knowledgeable group.  I would never have thought that I would be involved for three years. Thanks to all my blogger friends for such a great ride. I will try not to slide behind so much in the future.
Posted by L. D. at 4:07 PM 11 comments: