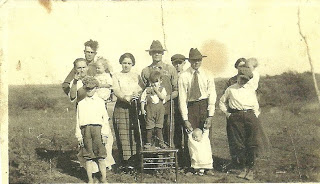 This is an odd photo of an odd family and I am related to them all.  There are no names written on the photo but I have Great grandmother identified right away.  She is the oldest woman in the photo who is pointing to the camera for some reason.  I suppose she is directing the crowd to look that way.

When you enlarge this photo you find it to be below amateurish.  The one boy has his head tilted and face in shadow while his mother and sister are hidden behind him.  The chair may have been intended for Great Grandma but that plan must not have worked out for them as she seems to be holding an unruly girl.

Great Grandmother Carrie Maxson Brown Driver is the older woman.  She was first married to my Great Grandfather Charles Brown.  They had two boys and one of them was my Grandfather Leroy Brown.  When Leroy was three years old, his dad died Carrie's husband.

Carrie Maxson Brown remarried Thomas Jefferson Driver a few years later and they lived in Iowa. They had five children which made them half  Great Uncles and Aunts of mine.  The two daughters were Ida and Florence and the three sons were Glen, William and Jesse. Most of them lived in the southern Iowa towns of Lorimor, Murray, and Osceola.

Back to the photo above, Carrie Driver then is shown above with her second set of family.  The two daughters and their husbands are in the photo and one stray son is standing behind her.  The odd thing about the family is that the daughters both married and had many children and the threes sons all remained bachelors their entire lives.  The Driver name in this family instance did not pass on as the daughters all had taken their husband's name. I wonder if Thomas Driver is taking the photo or if one of the other two sons that are not in the photo.

As an interesting footnote, both my Grandmother and Great Grandmother were with the name of Brown until they both lost their husbands.   As a youngster,  I could never figure out why they called the older one Grandma Driver and my grandma that I knew Grandma Brooks.  The great great had married my Great Great grandfather and the Grandma Brooks had been married to my Grandfather Brown. I would never been around to know one of them and the grandfather died when my my mom was 18 years old.  I may have been slow but my parents were not too good about explaining things.  I actually think before computers my mother really didn't have most of the information correctly in her mind and I am  a lot more clear with it with research on the web.

Thanks for stopping in today to visit my post.  You may visit others who are participating in Sepia Saturday, by  clicking here.