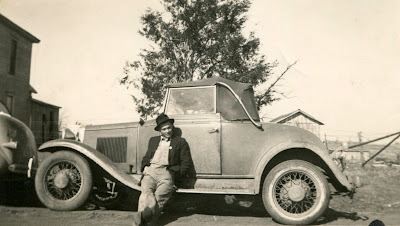 My uncle, Kenneth Brown, passed away this past week and his funeral was Thursday. I have so many photos of him looking dapper and leaning against things. He liked to have his picture taken with cars.
This photo was taken at the original farm place of my great grandfather Cyrus Wheeler. 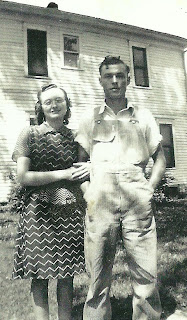 Kenneth Brown was born in November of 1917.  He is standing here with his sister, my mom, Zella Brown born in January 1919.  I didn't realize they were so close to the same age, but they were born 2 years and two months apart from each other. They had one older brother who was Marvin Brown. 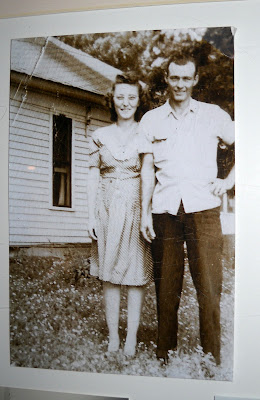 Sylvia Cervenka and Kenneth Brown married in 1946
Kenneth grew up in the Lorimor, Macksburg area and eventually ended up in the Murray, Iowa area.  He left as a young adult to travel to California where he worked on B 24 bombers.  He was drafted into the army and served four years.  After his service he returned to California to work. Marriage followed and returning to Iowa where his wife and he had three sons.

His family grew as his three sons, Robert, Don and Gene, all married.  When he passed away he had five grandchildren and 9 great grandchildren. 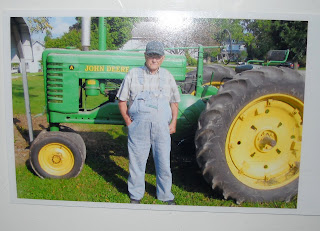 He farmed at first when he returned to Iowa and then later took a job at a Farm and Home store in Osceola, working hard for the business for 18 years.  He and his wife moved to Murray, from off of the farm, in 1975.

I will always remember him as kind and gentle.  He loved all of his family and was proud of them.  He probably was the one who most resembled the character of my Grandmother, his mother, with his positive attitude, friendliness  and work ethic. He lost his wife almost 11 years ago after she had become ill.  He took such great care of her at home for some time and was such a devoted husband.

The town of Murray will miss him as he had become a great member of the community and the church.  He is the last of the three children of LeRoy and Mabel Wheeler Brown.

Check out the other bloggers who are participating in Sepia Saturday from all over the world.
Posted by L. D. at 5:02 PM 12 comments:

With it being high school graduation time in our area I felt it was time to dig up faces from the past to share.  Classes of students from my past and my one brother's past who were receiving their education at Murray Community School in southern Iowa. 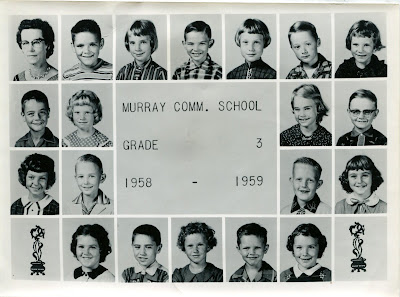 I didn't look up the married names of the girls even though they all are or have been married.  Anna and Phyllis live in Florida while Jim lives in Arizona. Six of my school mates still live in the area of Murray or Osceola. Bernie, Larry, Kathie and Sandy live close to me within thirty miles or less in or around the Des Moines area.  Barbara lives in Colorado.

Dennis Davis was our Vietnam war vet who had moved to Florida when  young,  probably leaving that summer after the school year. He lived in Florida with his parents until he was drafted into the army.  He passed away after returning to the states from Vietnam a few years later. Larry Schaff and Bernard Jones also served in the service, Larry in the Navy and Bernard in the army. 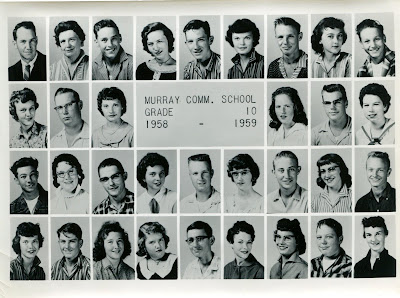 The same year as above my brother was in his sophomore year.  The styles have changed but the faces really do stay the same.  Most of these people in the photo are still alive and would be around 68 years old now.

Check out the others who are participating in Sepia Saturday, from all over the world.
Posted by L. D. at 3:44 PM 11 comments:

I really have never followed a theme before now. I guess I needed the shots to make the theme thing work for me,  so here it is. When I dig through the pile of war photos, I can find things that really work as transportation. I am expanding the theme from just old aircraft. 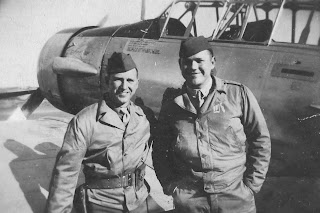 This has been become a mystery photo for me as to who the guy on the left is. I use to assume that it was my dad in the photo.  I know it was taken during WW 2.  As I look as some of my photos of my dad and photos that his brother, my Uncle Donald, had sent home, they both  looked alike in uniform at that age. There was a seven years age difference but in the twenties they had very similar features.

My Uncle Donald served in the Aleutian Islands which now today is Alaska.  It was our military base during the war, which I believe must have been in the territory that was controlled by Russia at the time.

My memory of Uncle Donald's work was to help fuel and service planes.  The mystery to me is that he is so dressed up for some reason.  Maybe he is being flown to a major city to catch a train home.  I just don't know. 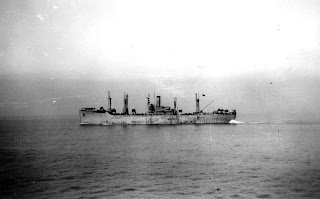 When my dad was sent over seas to Belgium as a soldier, he was sent in a very small boat.  The ship was too small for pleasant voyages and the stories he told of sea sickness by most of the men were gruesome. Keeping food down was very difficult as the waters were rough most of the way over there.  I guess hot black coffee was the thing that helped to keep food down.

I assume this is a photo of a ship that was seen on the way over or at the harbor where they were landing.  World War specialists probably can enlarge this photo and tell me it's a US Navy war ship. 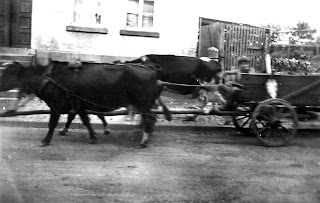 While in Belgium my dad took a snap of the local means of hauling and transportation.  The year again has to be our 1943-44. 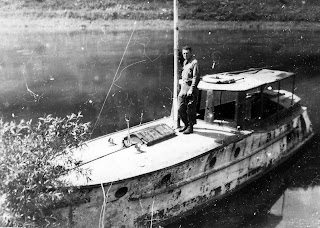 Some pictures just have to tell there own stories.  This is in Belgium after the German's have been driven out of the country.   I think abandoned is written on the back, but nothing else.  I have photos of my dad taken or various things like trains and tanks that have been disabled, bombed maybe. 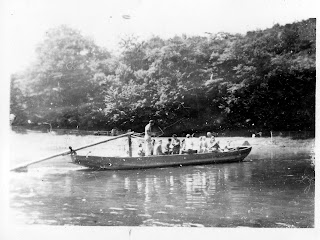 I don't know what is going on in the photo and there is no caption on the back of photo. They must be crossing the river and perhaps the bridges were destroyed.

Old photos carry such a mystery when they are taken sixty eight years ago.  The photographer is gone and the story can only be created by the viewer.  Time and history tells us some info but exact location and cause and effect are a mystery.

Check out others who are participating in Sepia Saturday today by clicking here for the link.
Posted by L. D. at 9:38 AM 10 comments: 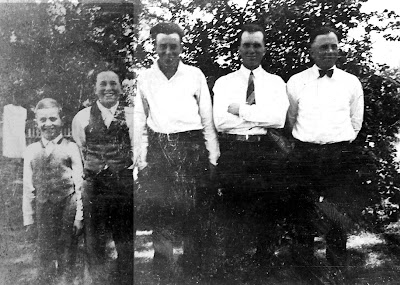 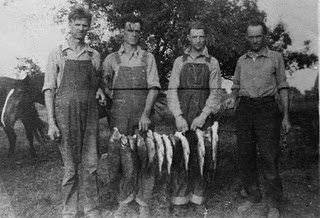 Fishermen lined up with their catch.  I have posted this before but this image is a clearer one from my brother's photo supply.  Grandpa LeRoy Brown in standing on the right. My copy of the photo has DAD written next to his head put there by my mom. Some of the guys could be relatives but I don't anything about them. 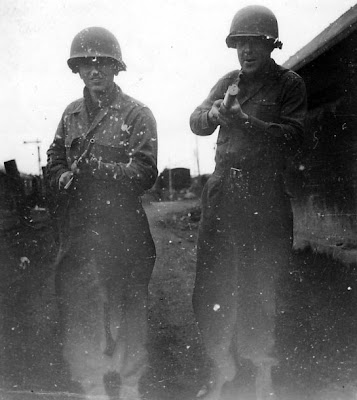 Dad on the left and another soldier out in the field on the front, who knows where.  I can not figure out if those are weapons or if they are just fooling around. Line them up and take a picture or get yourself shot. 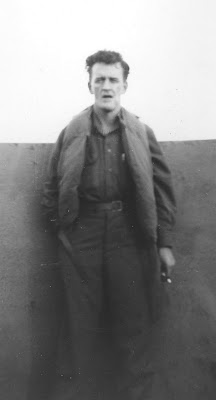 A standing soldier with a cigarette in hand.  Taking a photo of a guy for the memory of his friendship during the war. 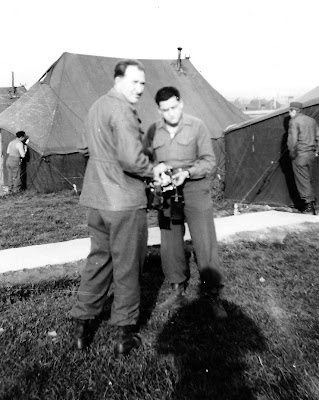 There is no line up here as it is an informal, casual shot with the shadow in the picture. They haven't been camped there for very long as the grass seems pretty much in full growth.

Check out the others who are participating in Sepia Saturday by clicking here.
Posted by L. D. at 7:42 PM 14 comments: