Finding new photos of my parents  while in their twenties has been an interesting journey.  A black photo album with their early dating pictures glued in and and first year of marriage was found in a box upstairs.  I had brought it home earlier, maybe a year ago, and I had not checked it out for it's contenets until now.

I cropped out this photo of them at a park with a Burgus family reunion.  I am guessing that this is either 1940 the summer before they married in December or the very next year.  They could have been married in this photo and baby number one was on it's way in October. 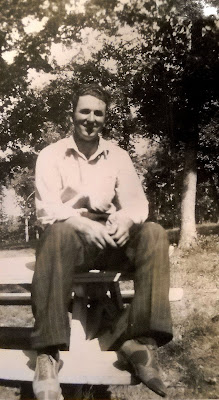 My older brother and I have had conversations with Aunts that told us that the War changed our father a lot in temperament.  They use to tell us he was such a happy young guy who really enjoyed life.  From this new group of photos I found this one of my dad.  He had to be 22 years old or a little more.  He reminds me of the high school kids I use to teach in school with that carefree happy smile. Dad is also dressed up for being in the park.  He either is courting my mom, which explains the good clothes  or he has just married her 6 months before which also explains the good clothes.  My mom was into clothes and being a little showy with them.  So her husband should be fancy looking also.

My dad had a lot of happy times and I don't think his change from being in the War ruined him.  I know he loved to laugh at a good joke, or smile when he caught a good fish.  He was so glad to see his  grandchildren and loved to travel.  The things that the War experience gave him was a continuous haunt of what  happened in battle.  He was one that talked about it a lot to any listening ear. He was still talking those last days when I took him to the emergency room the last time.  He was out of his head and his body was shutting down, mainly his  heart.  He was reliving the cutting off of a fellows leg out in the field with another soldier operating and his emotions were so real as if he was still over there at the very location.

Life is hard for all of us and we all have things that make us sad or distressed.  I don't think my father was any different than anyone else. The coping part is done so differently by each person in their own way.  Tragedy is a part of life and we lie to ourselves to think that any kind of life experiences can not be called tragic if they affect us emotionally in a severe way.  Scars are scars no matter how we receive them.

I am glad to find this new set of photos and to be able to view my parents in young love and their early lives before the war.

Check out all the others who are participating in Sepia Saturday by clicking here. 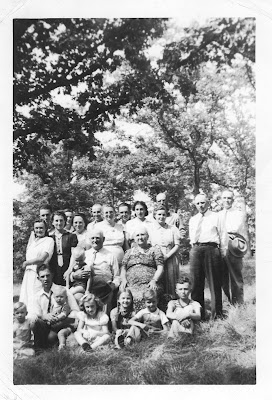 A first cousin of mine, Joan,  told me that our Great Grandmother Turner referred to her daughter's ten kids as a brood.  Grandma Grace Burgus is sitting next to Grandpa Charles Burgus in a park. It is reunion time and that means a family picture is to be taken. It is a beautiful photo with everyone looking towards the photographer. The town where they lived their later years was Murray, Iowa which was founded as a town in 1868.  Grandpa Burgus had raised the family on different farms before the moved into town.   This photo is taken in the early 1940's.

I am exhibiting this photo to show a clan at a period in time where all the 10 children are alive, married, and the older children have their children lined up in front.  My parents are in the photo on the top left side of the photo.  This could have been the summer before they married, which was in December 1940.  This could have been the summer after my parents married which makes this 1941. I won't pretend to give out identities at this point but I will crop it eventually, enlarge sections and share their names.  I don't know this for sure but I am assuming a few of the children in front are still alive today.

Thanks to my brother Ron who shared this photo with me, after receiving it as a gift from our first cousin Joan Callison who lives south of Murray. Thanks then to Joan also from me.

Please check out the other Sepia Saturday blogs that share this day with me posting family history by clicking here.
Posted by L. D. at 8:17 PM 15 comments: 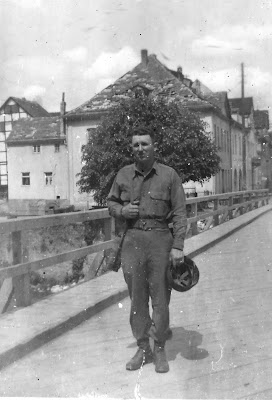 Jesse Thomas Burgus
1917-2000
I have written this story too  many times on some of my blogs so I will keep it short this time.  My dad had served a few years in the army, in the states,  and ended up his final time in the Battle of the Bulge.  He was in the very last part of that battle as he was sent over with replacement troops for the weary and the dead.  He arrived in Belgium in the fall of 1944 and spent some leisure time in this Belgium town.  I tried to find the name of it as I was told by a fellow blogger it's name.  I don't know why I can't find it as I searched my blogs but maybe the same person can help us out with the name. 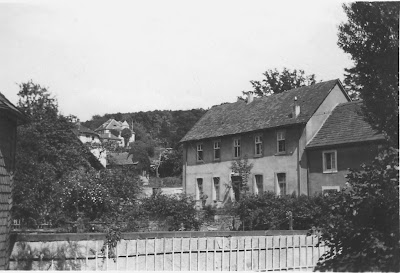 The town had been held by the German army for quite some time but they were forced to retreat out of Belgium eventually because of the allied forces advancing on them.  The photos of the area are so great.  My dad and his buddy took a lot of pictures of the place while they awaited orders to go onto the front line. 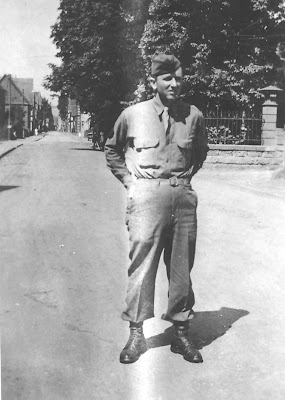 Dad would have been 27 years old in this photo, which was old for men to be drafted.  He already had one son at home when he was drafted and then had another right before he was sent overseas.  He is a farm boy, mechanic who fixed tractors, and had never left the state of Iowa in his life time. In many ways it was a like sending a bunch of guys to Europe to be tourist even though that was not the end result. 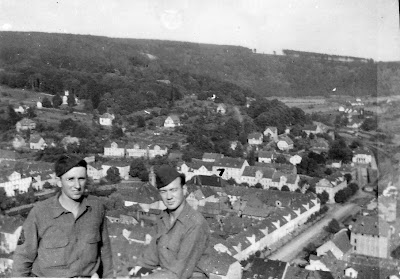 The check is next to the window of the room that he stayed in at that complex.  I assume it had been apartments.  He must be in a tower or on a hill to have had this photo taken. 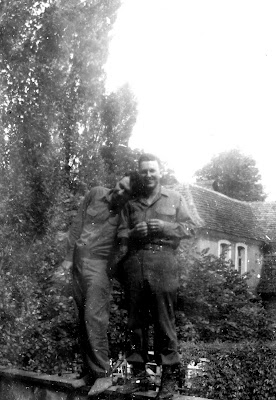 Not all of the soldiers were country kids as my dad did meet people from New York City and other larger more metropolitan place in the United States.  This photo is one of my favorites as it shows that the men needed each other to survive. The silliness of standing on a railing and making a silly pose makes me smile.  They were still kids at that age as all our kids in their 20's still are.

My dad wrote and sent a letter to my mom every single day, but he had to find friends to make the whole situation better.  He made friends even though there were good chances that one of them would be killed. He had a poster that has names of many men who signed it but no addresses were involved, so he returned to Iowa without any way to contact any of them.  He may not have know them all but it felt good to get everyone's autograph of a shared time together.

Family at war is my blog today.  I find that I am still needing to study the large packet of the war photos that I have and will share them when they fit the Sepia Saturday theme.

Click here to visit other  participants in the Sepia Saturday postings.
Posted by L. D. at 3:06 PM 14 comments: