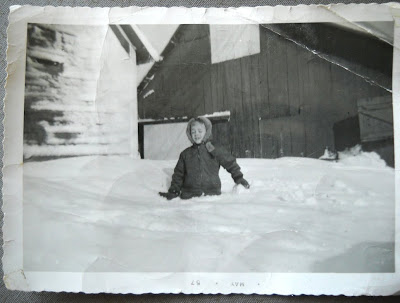 This photo was taken in 1957 around my birthday. I was seven  years old.  We had a snow storm on the day, March 26, and I am sure school was canceled.  We lived on the farm in southern Iowa, near the town of Murray.

The red coat was one of my favorites.  My older brother and I had matching coats, as that is the only style they sold at JC Penney's for young boys.  I remember getting that fake fur in my mouth and it tasted badly.

The barn in the back was designed a lot like the ones that they called sheep barns.  The center of the barn was a ground to ceiling mow and animals could have hay dropped down on them on either side. 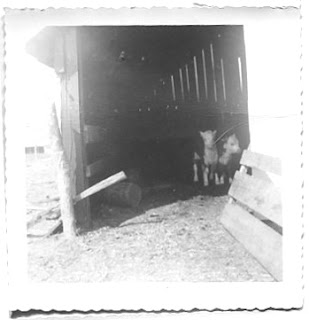 This is the left side of the mow and you can see the twin calves that we had that year.

There were milking stalls on the right side where dad hand milked the cows while the farm cats all watched and waited.  In the summer the flies were thick and the cow would be swishing her tail to keep them off of herself and also to hit my dad in the face.  My dad sat on a T shaped stool made from wood and the smell in the barn was always bad.  The new hay that was put in the barn each summer, piled on top of ancient hay from years before always made the barn smell so much better.

The present owners left the roof of the barn to leak and it caused the whole barn roof to rot and fall down in the center.

The building to the left was a grainery.  It was built special to hold shelled grain like corn, oats or beans.  The walls and floor were lined with shiplap wood pieces that created surface which were smooth sanded wood.  It was like  a wood paneling placed horizontally on the interior.  It helped to keep the grain very dry.  The grainery was moved by the new owners so they could drive their big tractors through by the barn.  Because of the moving of the grainery in 1970 to a bad location at the top of a hill the wind caught it and sent it rolling down the hill, destroying it.

You can see the barn in the background here on the right and the grainery behind me, the guy in shorts.  The year must have been around 1967, ten years later than the photo above.  My dad took great pride in his buildings and he had his sons keep them painted up every few years.

I need to relocate this photo and scan it as it is much clearer looking that what I have shown you.

Check out the others who are involved in Sepia Saturday by clicking here.
Posted by L. D. at 5:45 PM 12 comments: 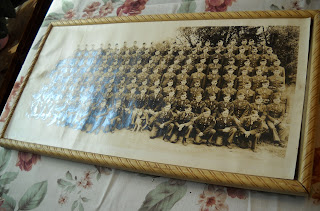 This photo hung in our house all of my life.  My dad was proud of this photo.  I have a letter that he sent to my mom and young son dated August 1942.   He had just spent his first day in the army and thought he would be ok if he just took it a day at a time. He was drafted into the army with a son born and another on it's way. 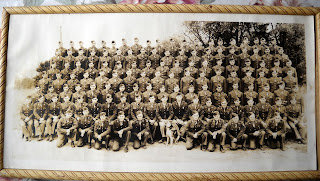 Every time I pick this up I have to search for Jesse Thomas Burgus standing in this photo.  He is in the fourth row from from the top and the far right side. This is the platoon that he was assigned to when he left basic training.  On the back of the photo it says. Battery B 89th  CA(AA),  Washington D.C. 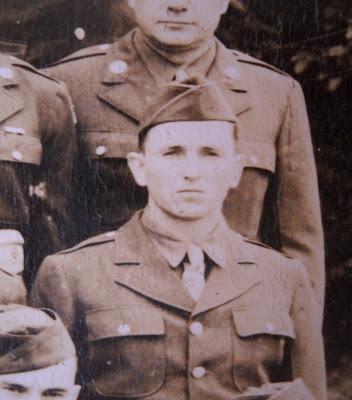 Digital cameras are funny as it detected that the photo is a little out of focus on the right side.  When I took the picture the camera would come back to me asking if someone had blinked.  My dad would have been in this photo at the end of basic training.  He would have been 25 years of age by the time he was through with basic. 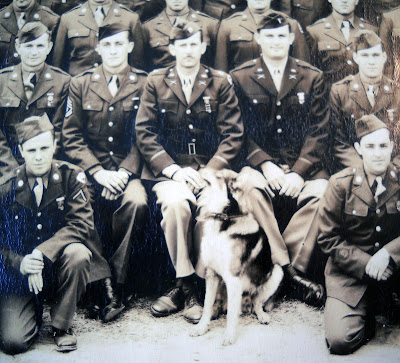 The higher ranked soldiers were all in the front row and the dog has his eyes protected from the flash.

My dad knew how many men were in the picture as he had counted them.  I wouldn't want to guess.  I don't know this for sure but I expect they were divided up and assigned to different platoons as time went on.  My dad was reassigned on when he went overseas.  With 1,200 World War 2 soldiers dying each day I am certain the majority of these guys are not alive.


My dad was old for being drafted into the army. He was one of the oldest among all the other draftees. Some of these guys were 19 and 20 in 1943 when this was taken. The youngest ones drafted could be in their upper 80's  early 90's now. I wonder as I look at the picture which ones went overseas for battle and where in the parts of the world that they were assigned.


Dad was in Washington DC for a year or more then placed in a new platoon that was shipped to Belgium. They were then sent on to the Battle of the Bulge.    The number of men who died in the total Battle of the Bulge was 35,000 men.


As my life settles down, I plan to create a blog just for my dad's World War 2 photos. I have a lot of army photos that I need to share with my brothers and I think blogging them will make them out there for others who are interested to see also.


Check out the others who are participating in Sepia Saturday by clicking here.
Posted by L. D. at 10:41 AM 17 comments: 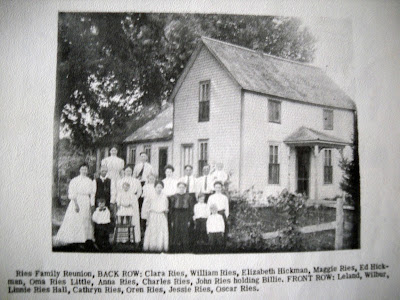 The branches are so many as we look at our family trees.  Here in the center of the United States the larger families found offspring from other large families to marry who all lived in the same rural area.  My family tree is full of large families in every direction when you follow my dad's lineage.

Above is a photo from a 1968 Centennial Book of the Murray, Iowa community.  It is a photo of the Ries family taken in front of a Henrey Ries family home.  I don't know for sure who it belongs to but my cousin Joan Callison must own the photo and know more about the photo.

Starting forward and going back I will explain this branch of the family.

His mother was Grace Turner Burgus and his father was Charles Thomas Burgus, d. 1949.  Charles is the guy we will follow to get to the Ries family.

My Grandfather Charles Thomas Burgus had parents who were Charles Burgus, b. 1838, d. 1898 and Elizabeth Ries Burgus, b. 1847, d. 1911.  We switch to the Great Great Grandmother Elizabeth Burgus to find her parents and family, the Ries family.

So the tree we are following is Father, Grandfather, Great Great Grandmother.  I call that a jog for those who only follow the lineage of the one name.

Now to lead you down a beaten path to nowhere.  My Great Great Grandmother Elizabeth Ries Burgus has to be some relative to this group.  She is not in this picture.   She could have been an Aunt because of the age of a couple of people in the photo that I knew.  I knew of the Ed Hickman in the photo and of Leland Ries who is the short little guy on the left.

My original intent to show the photo and to share the diverse ages of all the children. Also I want to show the typical Iowa T shaped house that was a style used through out the country. I lived in this same shape of house on the farm as a kid and my house today in Woodward is a T shaped design farm house.  I also was impressed with how all are dressed so well.

I am assuming that I will harvest more information about this photo from my cousin, now that I have posted it.  Check back for amendments or I may just make it my next weeks blog.  Clarification and corrections to Burgus's blog.

Check out the others who are participating in Sepia Saturday with blogs from around the world by clicking here.
Posted by L. D. at 3:18 PM 15 comments:

The ageing process........not my relatives

I am continuing with my explorations of the photo album I posted about last week. I had mentioned that the Webster family name seems to be the dominate name here. I have a second album that I believe is actually  the earlier generation of family. I have found Websters in that older  book and the one funeral photo explains that this man died in 1896. I believe he was a son in law to a different man, William C.Webster. 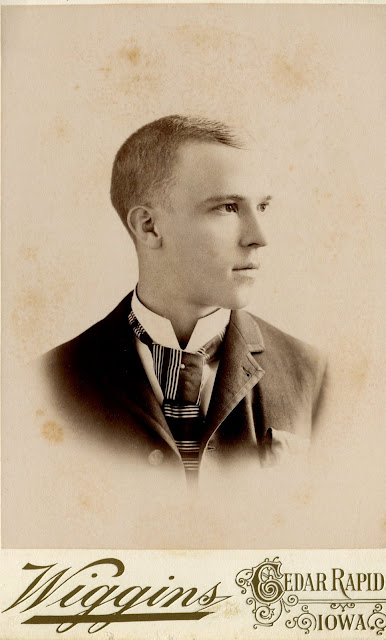 You can age this man in the red photo album.  He may have been at school when he had this taken as he ends up having all the rest of his photos taken in Osceola, Iowa. 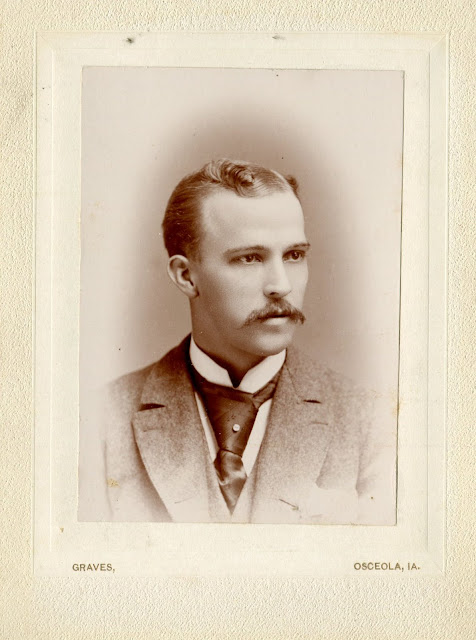 Unfortunately there is no name on this guy's photo.  He may actually be the a son of the owner of this album. If the owner of the album Callie Alexander.   I did find a calling card with the name of Callie Webster in the older album.  She could have been this Callie's mother. 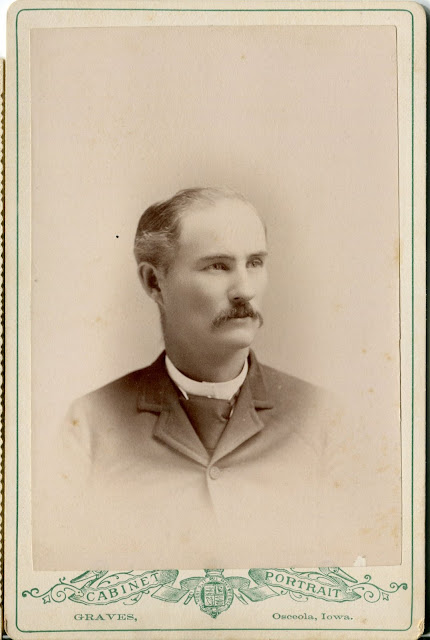 As he ages I can see the resemblance to an older photo of a William C. Webster.  That photo is an older generation of family so it could be his grandfather that he looks like. I will show that comparison later.

Amendment number 1.  Christine is correct, this guy has an attached earlobe.  I don't know my genetics so I don't know if the father can have attached earlobes and his offspring cannot.  I await the authorities out there who know the answer. I will have to look at the other relatives in this book to see if there are more like him. 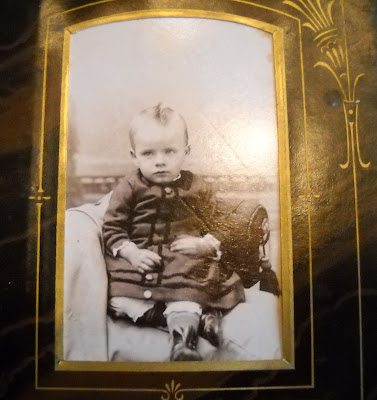 Just as a shot in the dark, this guy may be his younger photo.  I have no proof but I thought it would show you how mysterious this album proves to be. I know it looks like a girl with the dress but I think it must be a boy with the way the hair is combed. 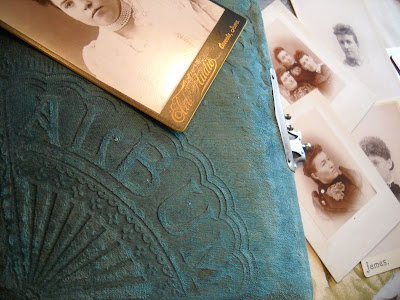 This is the sneak peak of the older album that I have.  I found some interesting calling cards in here that tie to the Webster's family and to a diary with Jackson and Hill  written by Mrs. Jackson.

I have bits and pieces as I continue on.  My wife paints portraits and she is good at identifying facial features.  I intend to lay out all of the photos of this green album on the table and let her connect the family tree.

Check out the others who are participating in Sepia Saturday, by clicking here.
Posted by L. D. at 10:32 AM 10 comments: