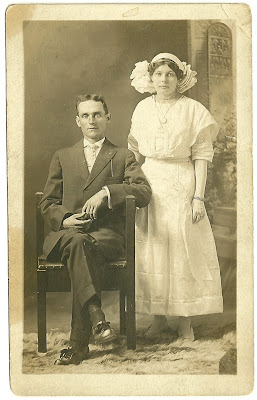 I received this from my Cousin Bob Brown a few weeks ago.  I was so surprised to see it as I didn't know that it even existed.  It is a very high quality photo of my Grandfather LeRoy Martin Brown and Grandmother Mabel Zella Wheeler Brown.  It is their wedding photo and I have the portrait form of it in a frame.  It is seen on the sidebar of this blog.


My mom had always had the framed wedding photo and I hadn't thought about it before but when my grandfather passed away in 1937 my mom was still in high school.  A few years later she was married and my grandmother remarried.  I assume that my grandmother didn't think she could hang her first wedding photo in her house when she remarried so she gave it to her daughter for safe keeping.

I really like the clarity of the photo and how you can see all the details of the shoes and clothing. I wasn't able to do that with my oval framed photo. 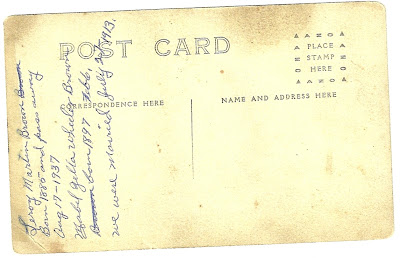 The photo is actually a postcard.  I recognized my Grandmother's handwriting on the back.  She was good to share the dates so I could verify my records.  As a footnote to all of this, I have the wedding dress and bow and bracelet that is shown in the photo.  My oldest niece Stacia has the necklace as my mom gave it to her many years ago.

Check out the others who are participating in Sepia Saturday by clicking here.
Posted by L. D. at 8:04 AM 21 comments: 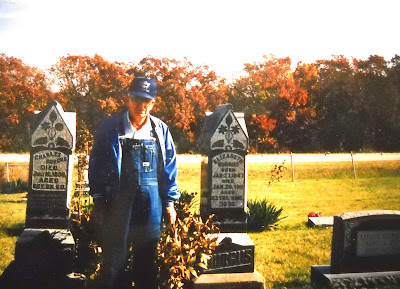 Buried at the Union Cemetery, in the country in Union County, Iowa are my  Great Grandparents Charles Burgus, d. 1898, and Elizabeth Ries Burgus. b.1847, d.1911.  I think it is interesting that they died 13 years apart and that the same stone has been given different treatment with the writing of information. I want to visit this cemetery sometime as Charles Burgus has some writing below his name that I want to know.  The two of them had 13 children.  My dad Jesse T. Burgus is standing in the photo, the third generation of those buried there. 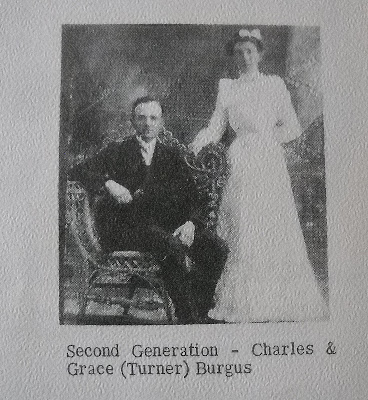 One of the 13 children was a son named Charles Thomas Burgus.  That confused me when I was young as the great grandfather and grandfather had the very same name.  He was the chosen one to be named after his dad.  My grandmother's standing in the photo in her wedding dress.  She was Grace Elizabeth Turner Burgus.  The photo is coming from a locally published centennial book of Murray, Iowa made in 1968.  It is a low resolution publication and I can't bring the photo into a sharper form with my photoshop. 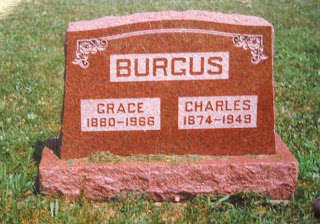 I can't screw up the dates on this one as it is sandblasted into granite.  They are buried on top of the hill at the Murray, Iowa Cemetery.  Grace Burgus had parents with the name of Turner, and her mother was an Abernathy.  I have found some interesting reading among my parents things about  Abernathy's as they helped to settle Idaho before it was a state and they lived among the native American Indians. They lived in Slurbie Valley somewhere in Idaho. 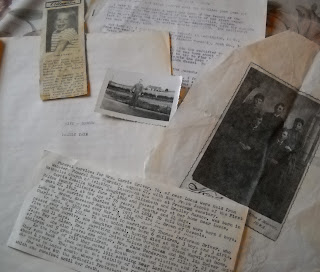 Sepia Saturday has helped me to touch the tip of the iceberg.  I have here writings that my parents have received from various relatives and old photos of people that I don't know.  It is just a beginning as I have to get a structured way of recording this started.  I have a few more years to get on it and time will be that I can really dig in to it all.  I have heard verbal tales about Ries', Abernathy's, Turner's, and of course the distant Burgus's.  It makes so much more sense that it ever has before but I do want to take control of it all. But, I still have piles to go and promises to keep. My apologizes to Robert Frost.

Check out the others who are participating in Sepia Saturday.
Posted by L. D. at 12:13 PM 12 comments: 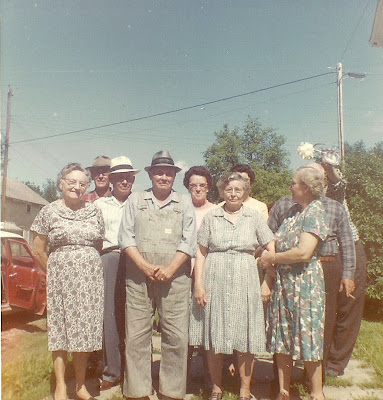 Instead of showing a very old sepia photo, I have a poor quality color photo of the 60's.  The photo is a good one showing my Grandmother Mabel Brooks with her brothers and their wives.  My grandmother is the second from the right in this photo.  The interesting thing for me of this photo is the prank that is going on while they are posed.  On the right side is Ivalea Wheeler.  She was married to my great Uncle Elva Wheeler and you can see his bald head behind her and he is holding the cigarette.  Behind him is one that I can't identify who his tapping Ivalea on the head with some object, artificial flower or something like that.  As you can see she is turning around wondering who is doing that to her.

The story goes further than this as she is the one who had such flowery language.  At that time in her life she would cuss a blue streak casually in almost any conversation.  I can imagine the hells and damns that are coming out of her mouth right then as someone bonks her on the head. Cussing wasn't unusual once in a while from a few of them but most of that bunch didn't really make it a daily practice. She was the perfect one to tease to get a great reaction. The woman who played Carol Burnett's mother in the tv show "Mama" would be that same character. Later in life, Ivalea mellowed out and was an avid creator of quilts.

On the left, in the front row is Ellen and her husband Weaver Wheeler.  They lived in Iowa Falls, Iowa. The next row back is Lee and his wife Esther Wheeler who farmed in the Macksburg, Iowa area.  I am assuming the guy in the very back on the left is Elga Wheeler and I am assuming his wife is the one not shown standing behind my grandmother. The guy doing the teasing is unknown to me right now but maybe it will come to me later. 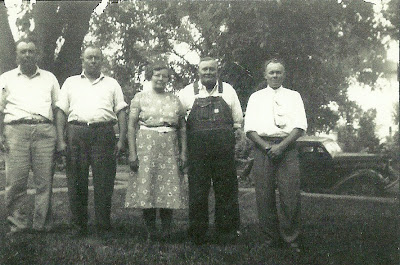 Here is the same bunch much earlier in their years.   Elga, Elva, Mabel, Weaver and Lee Wheeler.  One brother also lived in the Des Moines area and left the group behind.  I bet someone can date that car for me and I will know the year.

Check out other Sepia Saturdays by clicking here.
Posted by L. D. at 7:08 AM 10 comments: