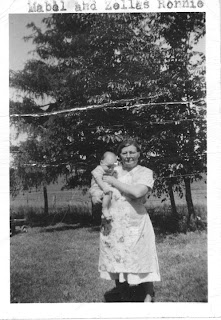 As I sort through the many pictures of the past that include the family members of my family tree,  I find it interesting that sometimes the trees help to identify the place in which the picture was taken.  They were taken before my time but yet I get clues and the mind starts to evaluate the background growth to know just where the picture was taken.

The above picture is clearly identified as my Grandmother Mabel Brown Brooks.  She is holding my mom's first born son, my brother Ron.  This makes it a photo taken in 1942 as my brother was born in October, 1941.

The trees are younger here and I can see a house in the background so it is in Murray, Iowa where my Grandmother lived or it was taken out on the corner a few miles out of town at the filling station where my parents first lived along highway 34. 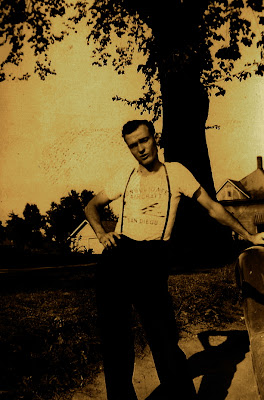 My mom's brother, my Uncle Kenneth Brown, stands beside the big tree for his informal portrait. The tree doesn't give me any true clues but the house tells me a little.  The house is not my great grandparents house as this house is a single story with a coal shed or small garage.  It is in town but I cannot guess which one.  It is just a mystery tree to me.  The age of my uncle makes the picture to  have been taken in the middle thirties.  He and my mom lost their father in 1937 and mom who was the youngest was 18 years old at the time.  Judging by how old he looks there it must have been before '37.
Yes one of my blogger friends is correct.  Kenneth's t-shirt says Consolidated Aircraft.  He went to California and helped build bombers until he was drafted.  I expect it is the 1939 or a year later. He could have returned to Iowa to go into basic training. 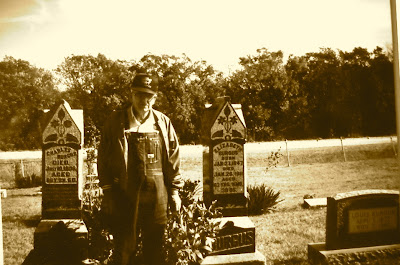 This cemetery is the Union Cemetery in southern Iowa and my dad stands in front of the stones of his grandparents on his dad's side.  The trees in the background shows that it is a rural cemetery and the timber runs parallel to the gravel road in front of the place.  This isn't an old photo as it was taken in 1990's but characteristic of a lot of cemeteries in Iowa they are lined with volunteer trees around their fence lines.  The old cedar trees in the cemeteries are at least a hundred years old. 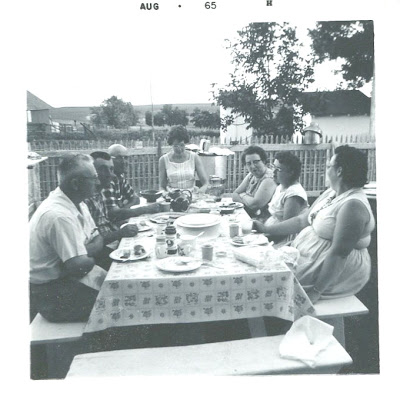 The trees in the background are in rural a rural area, on a farmstead near Murray, Iowa. You can see the barn in the background on the left and trees lining the fence row. The tree next to the small shed was probably a volunteer tree as it looks too close to the shed to have been planted there on purpose.

The husband of the women at the end of the table must be taking this photo. They were having their evening picnic meal before heading inside to play card through the evening. She is Janice Nannen sitting at the end of the table and she is the only person still alive today. The photographer would have been Ted Nannen the farmer who owned this place with his wife.

In memory of those in the photo from left are Jesse Burgus,  my dad, Galen Burgus, a distant cousin, Bill Farr, my uncle, Janice Nannen, the hostess, Mary Farr, my aunt and dad's sister, Zella Burgus, my mom, and June Walters Burgus, distant cousin's wife.

As we all think back there were favorite trees in our lives that we experienced or remember.  I liked climbing trees and building things in trees but some trees were just large trees that shaded my sand pile or held my swing.  The large trees around my property now are old and have a lot of history that was before my time 35 years ago.  The weather has removed one while I was living here and one was taken away by the city.  I still have three large silver maples that could tell tales of lightening strikes and of model T's passing by the house.  As they become more of  a dangerous threat to my house they will have to be removed.  Before that I guess I need to write a poem about them.

Check out the others who are participating with Sepia Saturday.
Posted by L. D. at 6:21 AM 9 comments:

The Brownie camera by Kodak was a great new invention. My parents put away the box camera and started using that little Brownie. It had a small viewfinder that you looked down into and then you pressed that plastic slide button downward. If you weren't careful the clicking of the button caused the camera to flip up and down.

The photos came back in a little packet all connected together at the top. It was designed so you could tear them out of the book but fortunately for me they were all still together. 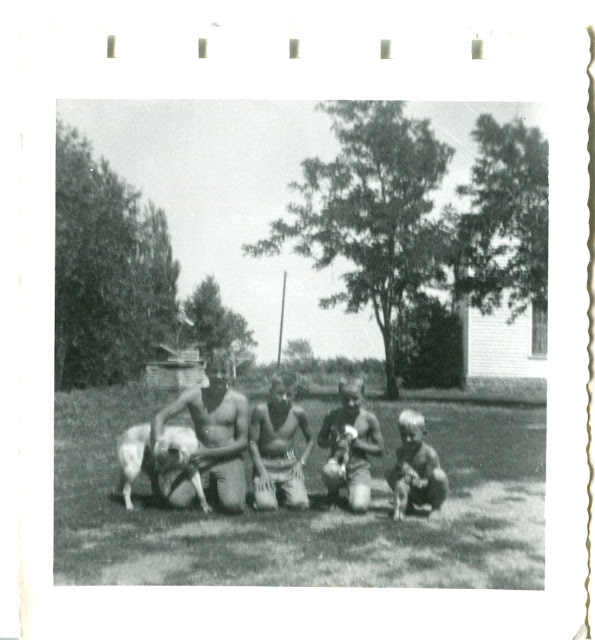 Southern Iowa during the summer of 1956 and mom has lined up her boys again.  Two of us brought our cats and one grabbed the family dog.

The old house in the background is one of the T-shaped farmhouses with no insulation but it did  have electricity.  Running water, undrinkable, was in the house when we moved into the house in the winter of 1953.  In 1959 my dad built a modern ranch house on the same site. 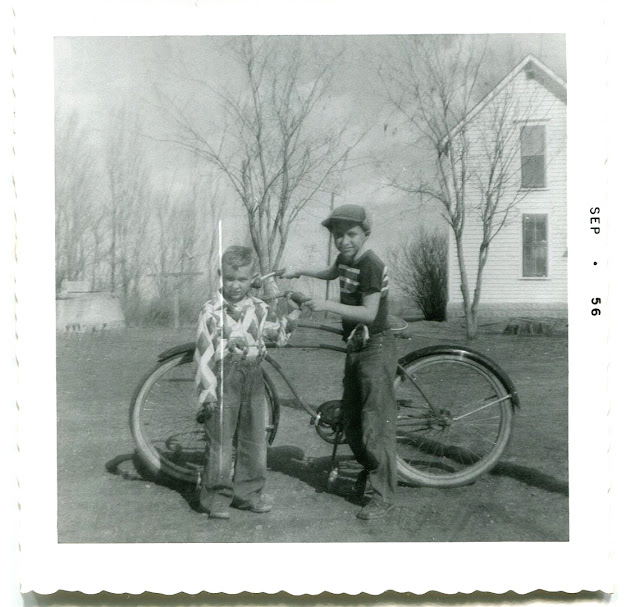 Larry and Dwight standing next to Dwight's bike. I was 6 and in the first grade. My hand me down shirt looks a little large but I probably grew into it.  Behind us are the two locust trees with very sharp thorns.  To the left is a cistern where water was pumped into it from a pond a half mile south of there.  It was filled with water and we pumped it into the house for general use but water for drinking came from a well nearby.  The date on this one photo which must have been the top photo, indicates when it was developed so it could be early spring as there are no leaves on the trees.  Maybe it is fall but there are no leaves on the ground. 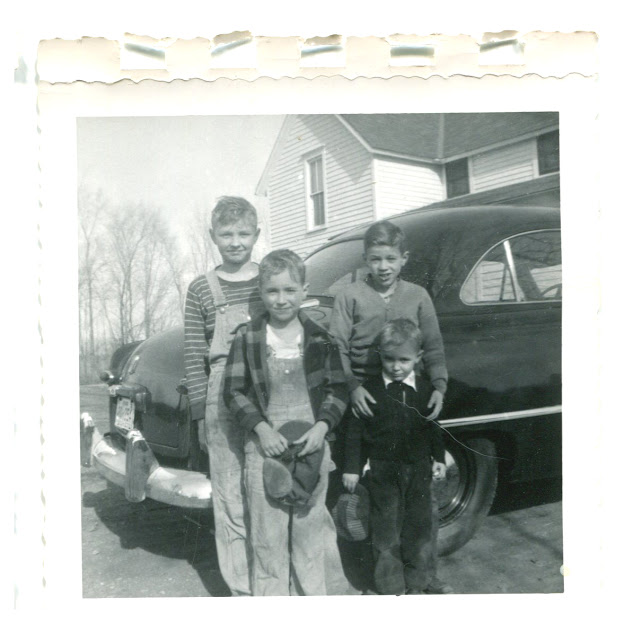 This is taken when it was cold as you can see the coats on the two young ones in front. I really don't remember that car as my dad bought a newer 1953 Ford and it was blue. 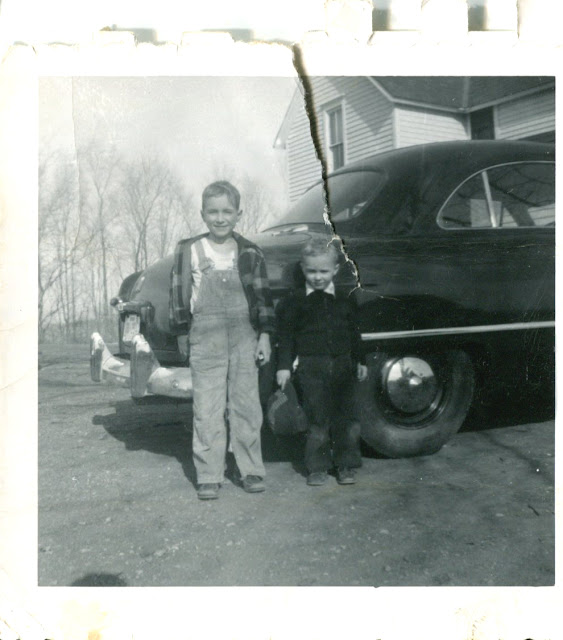 Divide and conquer so to speak as we separate the youngest out for their photo.  This series of photos is the only bunch of photos that I have that gives me a visual record of the house.  The front porch on the other side of the house had square columns on it to hold up the roof.  I was always impressed with those square Greek influenced posts. I didn't fix the tear as it makes the photo have a little personality. 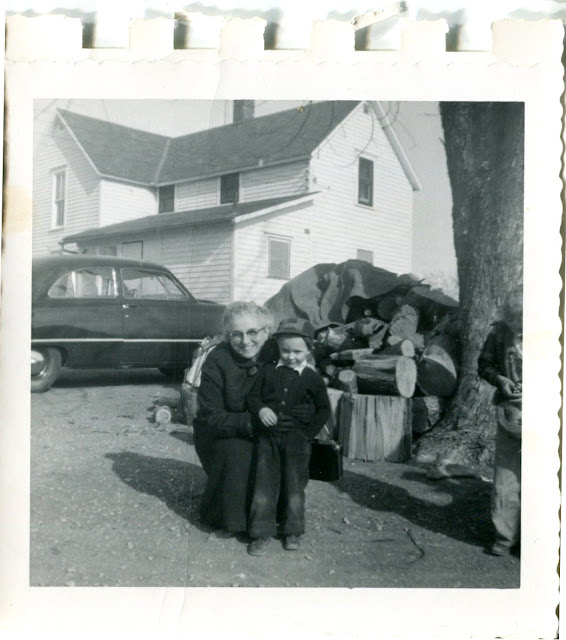 My Aunt Ruby was the sweetest woman.  She had lost her husband, Frank Henderson, before I was born.  She was one of my dad's older sisters and she liked to keep track of  him and his family.  She and I are standing next to the woodpile that will be burned in the winter. I really think this has to be in the fall as in the spring that pile would have been all used up and the bark would be in my sandpile that sat right next to it.

Having the two brothers come to Iowa for a short visit back from their California and Arizona homes made me a little nostalgic.  They left Iowa to live in the warmer climates in their late twenties.  Both of them love to come back in the summer and admire our weather.  They do not come back to survive our winters.

The last home where my parents lived in town is soon to be sold.   The neighbor boy on a nearby farm, who was my older bothers age,  had two children.  His two, brother and sister and their spouses, have bought the old farm, each owning half of it and they are trying to bring it back as a farm.  The previous owners allowed all agricultural land to grow up into weeds and trees.  It was 240 acres of land with 180 acres of farm land and the rest was timber.  The past is hard to find there when you return to visit as the roads through the property are overgrown and the barn has collapsed.

Thanks for stopping by to visit my family branch.  Check out the others who are contributing blogs honoring Sepia Saturday by clicking here.