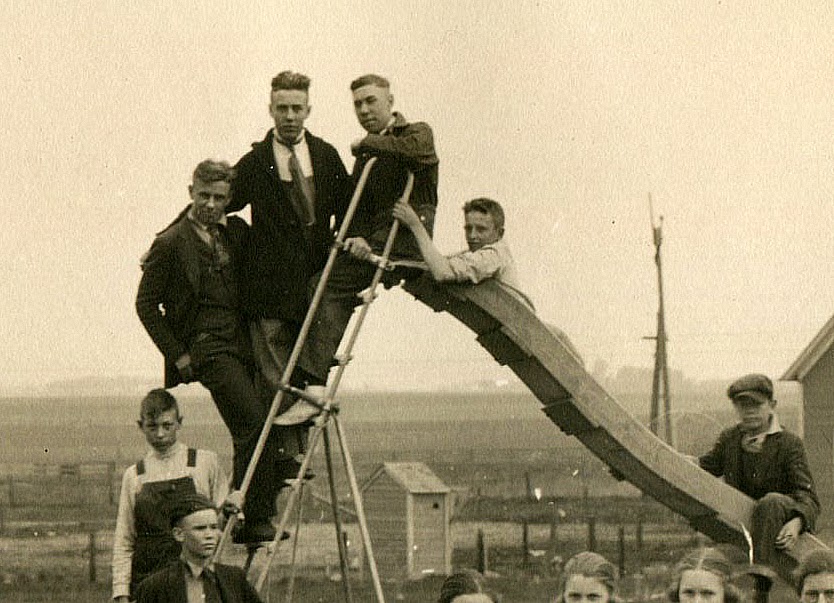 It isn't the most dangerous thing that people could do in Woodward, Iowa in 1920 but for a young child it might be a little scary to be at the top of a slide.  Thinking of the things that people would do to cause them injury at that time would be falling off of horses, drowning in a pond and catching a bad infection.  This photo is a cropped part of a very long photo of the entire student body, plus teachers, in 1920.

A photographer in town had a special camera that took wide shots.  From my living in the town I am aware that he took wide shots of many things for ten years or more.  I have seen a long photo of all the lodge members in town outside on the street in which I framed for the owners.  It was a lot of people being captured with their winter hats and coats trying to keep warm standing in front of an old opera house.  I have see a photo taken on my property of across the street with 12 or more model Ts Fords lined along the street. The camera was a special one in which a mechanism allowed the picture to be stretched out rather than look like a curve. This photo was of all the school plus teachers in 1920 and I do have in my possession of one  taken in 1916.  The building in the photo was built in 1909. I taught in that old building for 4 years starting in 1976.

When I look at photos like this from the past I find that a simple glance is not sufficient. The individuals in the photo all have a behavior to share or a state of being in the social classs of the country.  I see girls in fancy dresses and shiny shoes and I see girls in dresses made from flour sacks and no shoes.  Boys are either of the high end of the economic chain or boys are farmers in bib overalls. 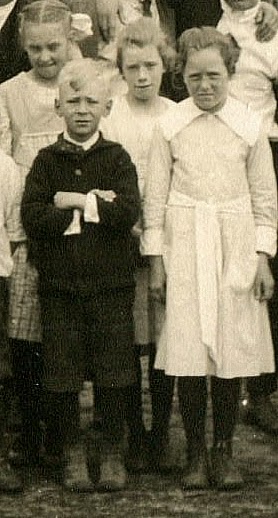 I have taken parts of the group to help see the real faces of the children that live on the prairie. Personalities can be depicted clearly with some of the faces and others just blend in with the crown. My mom wore those stockings as a girl and she hated them.  They were required if you wore a dress and wool was a part of the material used to make them.  They went over the knee and they didn't stay up for very long.

The older boy with a tie glances out to his future while others who are younger seem to be tolerating the standing still for the camera.  I don't know how far away a photographer would have to stand with his large camera but he couldn't be that close to communicate to this large group.

The two girls have nice white dresses in this photo with the boys are wearing some form of dress up suits. The bows in the hair of girls are hard to see but the one has a very large bow and I think she has a corsage decorating her dress. I just noticed the boy on the right is not wearing shoes and the pants are short to the knee.  The smaller boy in front is probably wearing his brothers hand me down pants as they are rolled up to shorten them and they seem a little over sized.  It is hard to know what is going on in their lives in this time period, but this is the Depression of 1920 time frame.

Some of the pictures tell their own stories.  The plaid sleeves to a dress with a collar that reminds me of a nautical theme. Her shoes are in good shape and she hasn't heard that she should turn and look at the camera. 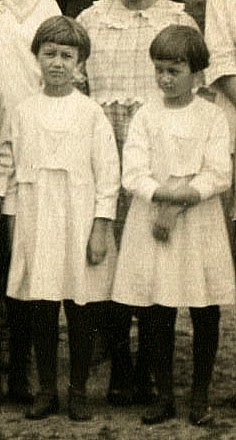 Do you think that these two are twins? The one is looking at the camera, squinting while the other is looking away for the time being. 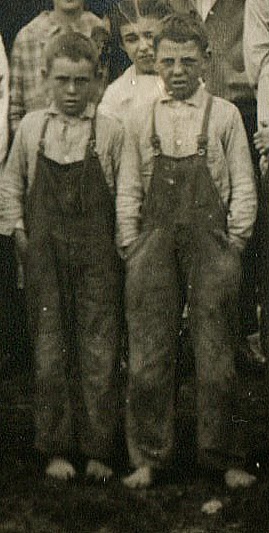 These guys are probably farm boys who live near town.  They would have to walk to school from the edge of town. They look alike to me as if they are brothers.

I really have too many observations to share to do in one blog.  I don't know for sure if they are the oldest boys in school. One man on the right could be a teacher and others could be high school seniors. One is wearing glasses. 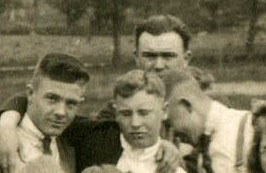 Teenage boys are always the same no matter what year that it is. Someone is sharing a funny and ducking or had to sneeze.  The man behind them looks a lot older than the three in front. 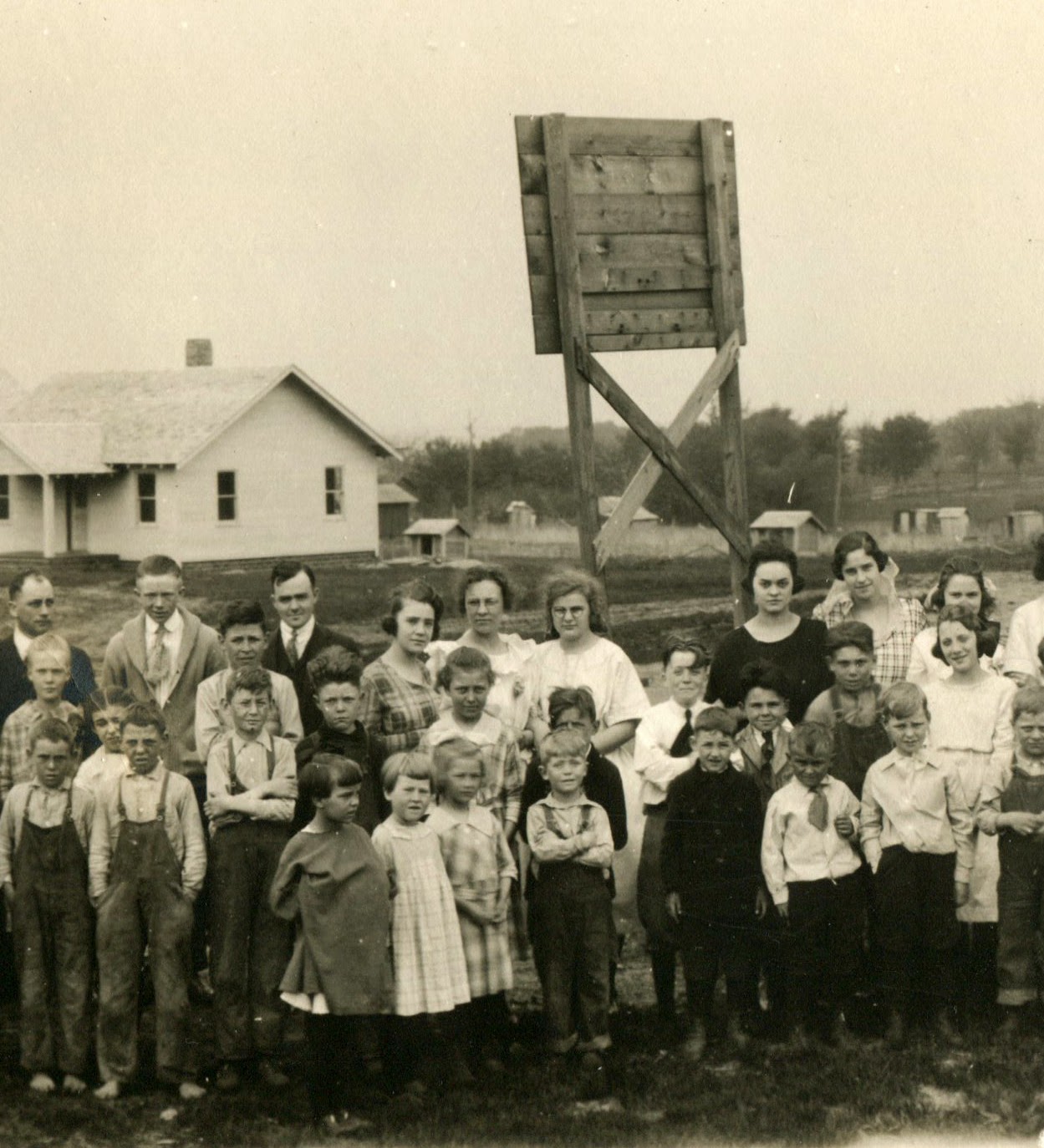 This is a section of the left end of the photo.  The younger classes were placed there together even though older students and maybe teachers are in the back.  The back board for basketball stand up with a lean in the background.  The game of basketball was played with very different rules than it is played today.   There were center holding sections in the middle and groups at each end that stay put.  It is hard to explain but it reminded me of our original six on six girls basketball that was played when I was in high school. 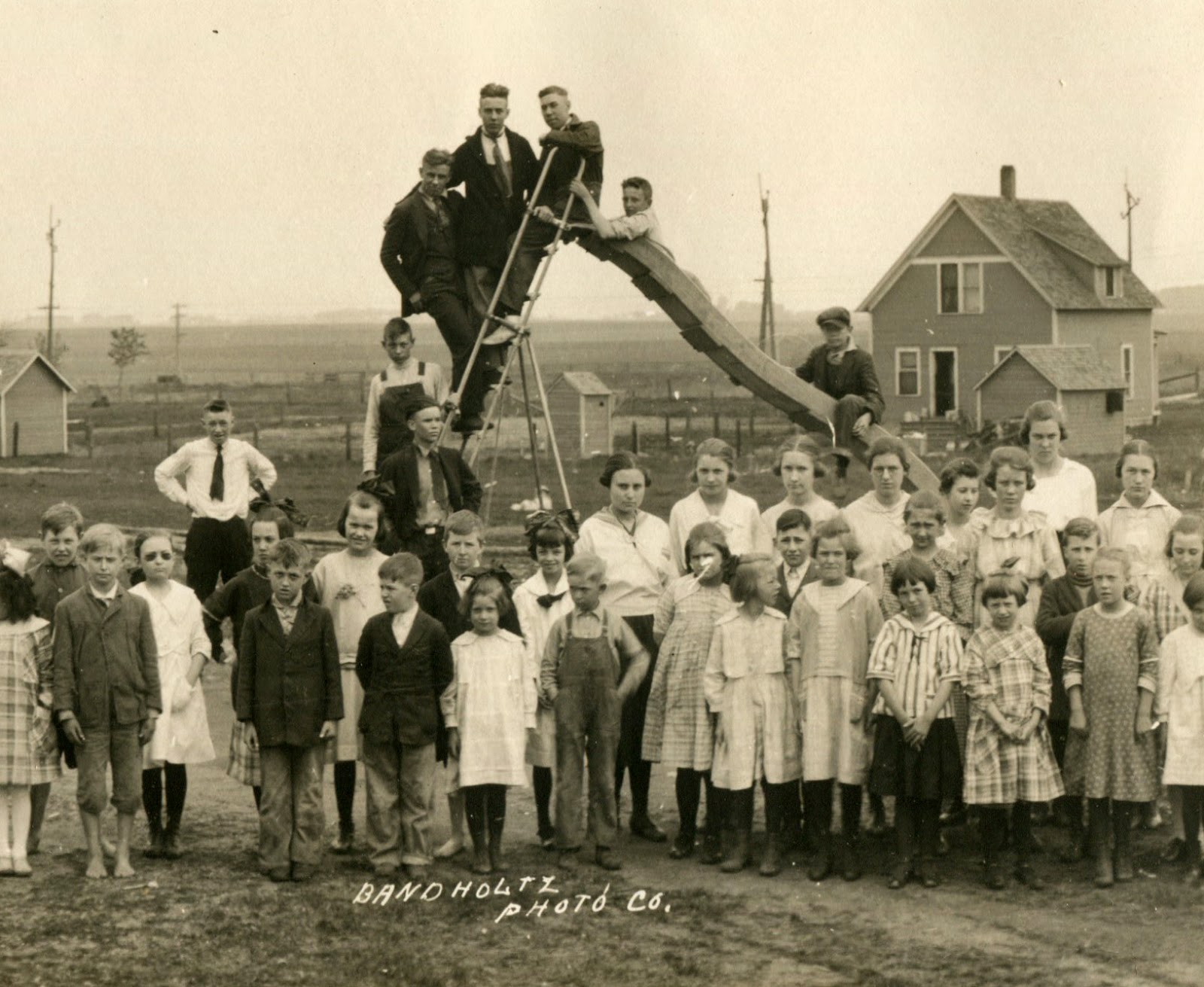 I will finish with this right side of the photo on this posting. I wonder if you can pick out the little girl that is wearing dark glasses.  I think she is partially blind as no one else wore sun glasses at that time. We have a girl who moved her head to the right and older girls in the back who might be high school seniors.

The whole photo has potential for a history buff in this town to really analysis the groups of people socially and really discover who they are.  I have a resource of the senior composites of the 1920 school year so I could pull out faces from the large group.  I didn't attend school here and it isn't my home town but I have lived here long enough to have a bond to its history. I was around when they tore the building down in 1993.  The history held in one shot is fascinating to me and I will be posting more about this shot of history.

Check out other blogs from around the world who posted today on Sepia Saturday. Click here and go to see what others have posted on the theme of living in dangerous times.
Posted by L. D. at 9:10 AM 15 comments: