This photo of John and Iva Horton reminds me of Grant Woods' painting of American Gothic.  All that is needed is the pitchfork that John could be holding. Iva actually was taller than John by a half a foot. When I found this article from the paper, I thought I would have found a load of valuable information about them. Then I realized that I had no dates for a reference point and it is written with minimal information. The date of the event that includes the year is on the paper's page, which I don't have. The place of the event is in Osceola, as I know that as it came from the Osceola, Iowa paper.  The article doesn't say much at all and the children are not mentioned in the article.

My Grandmother Mabel Brooks, a widow,  married Oscar Brooks, a widower back in the thirties.  Iva V. Horton was Oscar Brooks sister.  Because of their being brother and sister, my family became close friends to these step relatives, my grandmother's in-laws.  I considered John and Iva to be like my grandparents and yet knew that they were step great uncle and aunt.

Clues to the date of the anniversary come from other events in my life in relationship to the couple. I remember going to their 50th anniversary gathering of a few family members and we took a cake for them.  It was covered with gold rosettes of frosting and the number 50 was on the top.  I was 11 or 12 years old then so I think that it was 1962.  That means the photo above was probably in 1972 or near then.  I was in college then so I didn't attend the event.

The couple were like the Walton's on the television show as they lived most of their lives on a farm south of Murray, Iowa.  It was an 1800's style farm even though it was early 1900's that they were married.    They had built their own house while living in a small tool shed.  They never threw anything away so that while one visited you could feel like your were visiting a place back in time, a museum. They had four sons with the oldest one George, being killed in WW II.  He is buried in France. The other sons are Loren, Harry, and Lowell.

I did find some relevant history about them when searching cemetery sources. . John S. Horton  b. 1888 - d. 1977, Iva Horton b. 1892 - d. 1982.  Iva was born in Champaign, Illinois. How she ended up in Clarke County Iowa and becoming married to John I just don't know.   I visit their graves at the Murray Cemetery every year when I visit my parents graves. 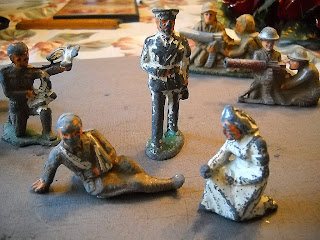 I was fascinated with the couple and as I grew up they treated me like a grandson.  The things in my house from this couple are so many.  We eat at an oak kitchen table everyday.  They ate at it in their kitchen sitting on backless chairs. The table was always covered with a tablecloth so I never knew that it had a stenciled design on its top. 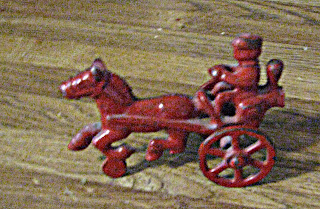 I have antique toys and many tins from their house.  I have dishes and stoneware storage containers.  I have an oat sprouting cabinet, that sits in our living room, holding my antique toy collection. Many more things are in our house that remind me of John and Iva.  I refer to my many items as things from my John and Iva connection.

The stories I have from my experiences of them could be written in a book. I could blog about them for many blogs and maybe sometime I will do that.  I was just glad to have found the newspaper clipping from my mom's things and it has spring boarded a lot of great memories. 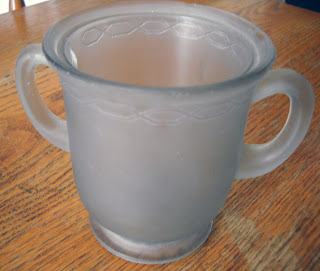 I have scattered photos of things that they gave me.  The spoon holder sat on this oak table that was in their kitchen.  The clean silverware sat in the container so that one could reach for the item that they wanted.  The old sink in the kitchen had it's hand pump still installed next to it so they could pump up water from the cistern below in the basement.  The wood burning stove had been converted to a gas stove and oven. 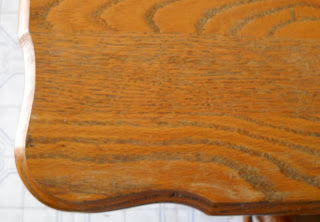 The oak table became mine while I was  in college as the Horton's moved into town during that time.  Iva wanted to be sure that I would want it and take care of it.  I already had collected a walnut table from my grandmother so she was assured that she wouldn't have to worry about it.

I really have posted a lot of photos about the things that came from my John and Iva connection. I have a lot of things that were given to my mom and dad that I now also have.  I enjoy having the items from their past but most of all I cherish the memories that came with them.

I have been working on this blog for awhile and found that I made it way too long. I guess there lives and family that I observed and shared my life with belongs in a full book.  In the process of doing this I was doing research on the son that they lost in the war.  I found out that he was in the Normandy invasion and is buried there at the Normandy American Cemetery. I think that will be another blog in the future. ( Colleville-sur-Mer, France,Normandy American Cemetery sits on a cliff overlooking Omaha Beach and the English Channel, east of St. Laurent-sur-Mer and northwest of Bayeux in Colleville-sur-Mer, 170 miles west of Paris. The cemetery may be reached by car by traveling)

Visit others who are doing Sepia Saturday by clicking here.