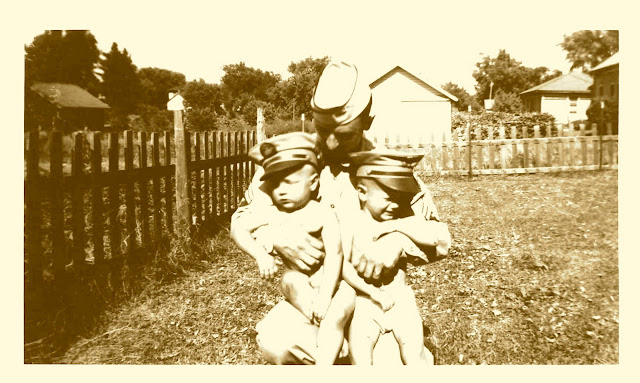 The two guys and my dad are in the backyard of their temporary home in Murray, Iowa. I was having some confusion about the time and ages of everyone here but I had not been born yet.  Their squinting from the sun makes it hard to identify them but the one on the left is my brother Ron. He is 17 months older than my brother Rex on the right side.  My understanding is that my dad, Jesse, was shipping out for Europe headed to Belgium.  He was saying goodbye to his sons and my mom Zella. My mom was living with her mother Grandmother Brown.  Dad's mom and dad also lived in the area on the opposite ends of a block.

My dad had been in the army for a few years but was stationed in Washington, D.C.  He was able to be home when Rex was born but returned out east after the visit.  I am sure now in this photo he was headed for the train station to again be on the coast to ship out. My oldest brother was a smaller guy than his older brother Rex so they do look to be closer in age. 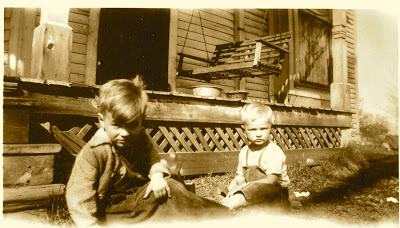 Sitting in from of my Grandmothers Brown's house is Ron and Rex.  My dad was fighting in the Battle of the Bulge at the time this photo was taken 1944.

When my dad went into the service, my mom and my two brothers lived there with grandma. My mom was returning to her home to live as she and dad had first lived in a small house right next to the train track. It all is a complicated story and by my simplifying it makes it confusing but when dad returned home the family of four lived here until they found a farm to rent and farm house to call home. 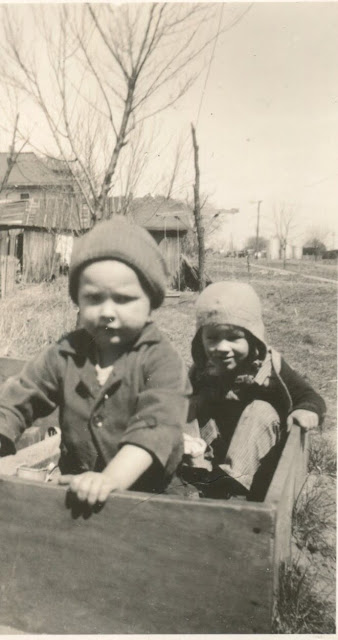 The oldest brother, Ron, is sitting in back of the box and Rex is in the front. By the time they were in grade school I believe the two guys were the same size. Rex did outgrow my older brother. The photo is probably taken in the same town of Murray. 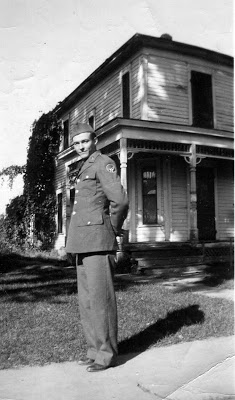 This is a photo of my Uncle Kenny standing in front of grandma's house. It was a big four by four styled house and had the corner wrapped around porch on it. Some day I am going to share the life of this house with all the photos of family that were taken outside around this house.  Photos have been taken on all four sides of the house. Next door many family photos were also taken as they thought the Morrow's house was nicer looking with its fancy porch.

Both houses are still standing today but one would not be able to identify them. They were remodeled into totally different styled house. The two story house had the second floor removed and it was made into a ranch house with a cape cod flavor. On the whole block of Fourth St. only three houses are still standing.  At the far opposite end of this block my other Grandmother Burgus lived and that house is still standing. The three houses between them have all been removed.

As the theme was a prompt showing two children who were orphaned by the sinking of the Titanic I expand the idea of what could have happened.  My dad went to war and the chances of returning were low.  He carried a radio with the scouting party that was searching and spying on enemy territory in front of the lines.  He crossed the Remagen bridge when a breakthrough was created on enemy lines. There have been moments of thought that my dad could have instead not survived that time period in the war.  Thousands of soldiers died from many countries just in that one very long battle.  My brothers would have been still around today.  The next two boys Dwight and myself could never have been.

Check out the other responses to the prompt on the SEPIA SATURDAY site by clicking on the name. Thanks for stopping by today.
Posted by L. D. at 2:05 PM 8 comments:

Seeing Spheres before my Eyes...... 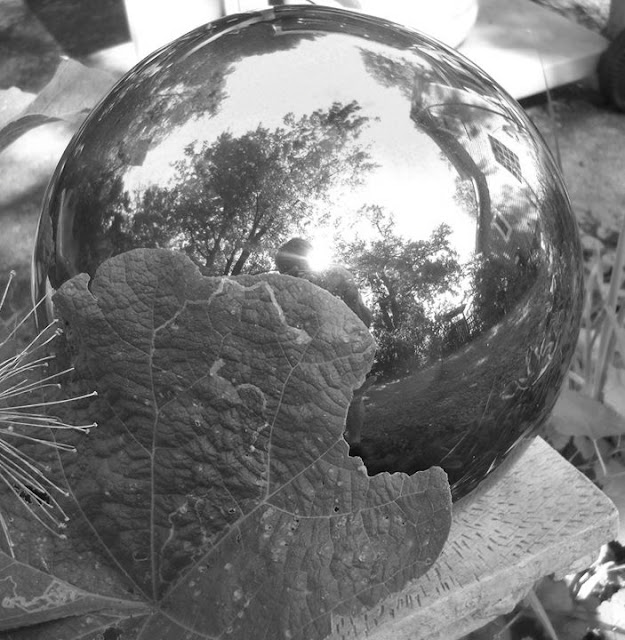 The garden glass reflection ball can seem to be more like a sculpture when it is black and white. When it is seen in color the viewer would be far more distracted and not really appreciate the reflective shape.

Christmas baubles too, take on the special shapes of shine and glow.  The shape of a sphere, no matter the size, seems to be magical. 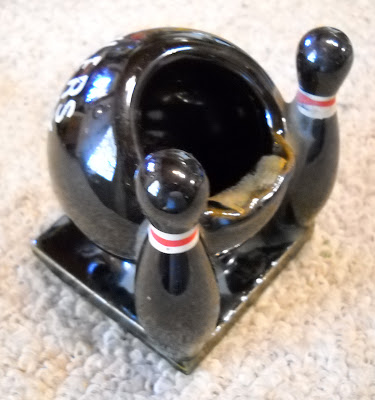 A 1960s ashtray takes on a special look too, but in this case it is suppose to look like a bowling ball.  It was my dad's ashtray which was too small for all the smoking that he did.  Cigars really put out too much ash for this little guy. 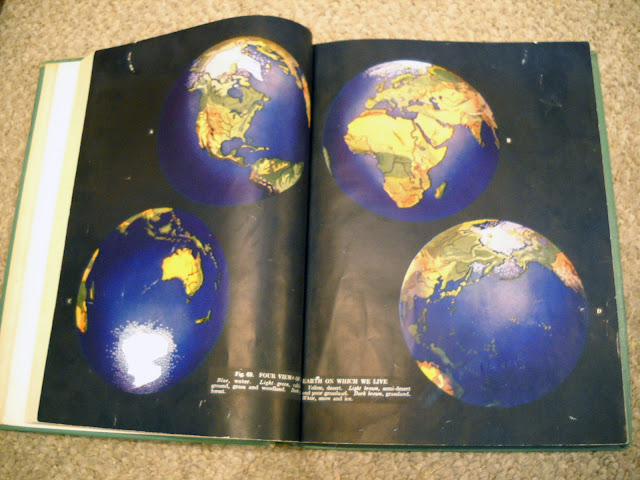 The earth is illustrated in the old geography country school book.  The book came from a country school near a farm where I lived in southern Iowa. My dad purchased a bunch of books from the closed school. The book was printed in the late 40s and I can imagine how fascinated a student in a country school would be when they first opened these pages. I remember my own state of awe when I first saw the book.  A globe in the classroom would never have this much detail in color.  I expect the artists had to use their imagination to illustrate it as no person had been off the surface of the earth until 20 or more years later. Photos taken of the earth must have been later than that. These two pages are the only color photos in the entire book. 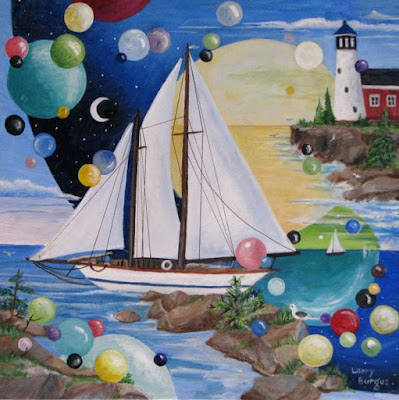 I shared this painting of mine a few blogs back in the black and white version.  I had many requests to see it in color and I do have spheres floating around in the painting.

Others are prompted to react to a round object and find photos with similar shapes.  You can check them out at Sepia Saturday by clicking on the brown name.  Thanks for stopping by today.
Posted by L. D. at 9:56 AM 5 comments: 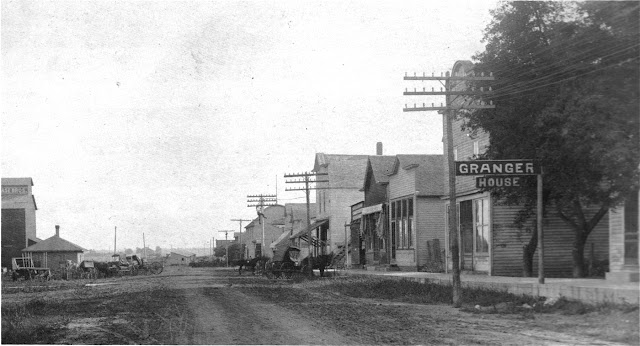 Granger, Iowa, USA probably taken in the early 1900s.  Most all of the buildings are gone now but a couple of them on the right side still stand.  I think they turned them into bars. 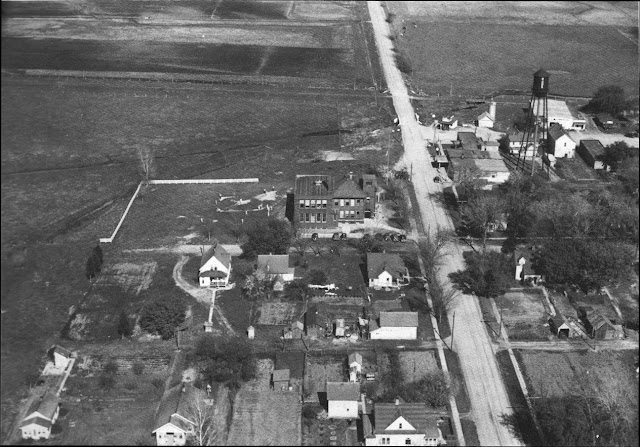 Granger, Iowa is pictured here also with the first  shot being being located at the top corner of this photo.  If you were to look down the road that travels by the water tower that would be where that shot was taken.  The taller building is in the above photo.  I would date this photo as around 1950s.  The school building is gone now and three different building programs have change that whole area.  I taught in that old school building, top floor on the opposite side. That was in 1976 through 1990s. The room had a great view of all the farmland being worked in the area. It was a neat old building that used to be the full k through 12 building for the town.  In 1969 Granger and Woodward merged as a school district. 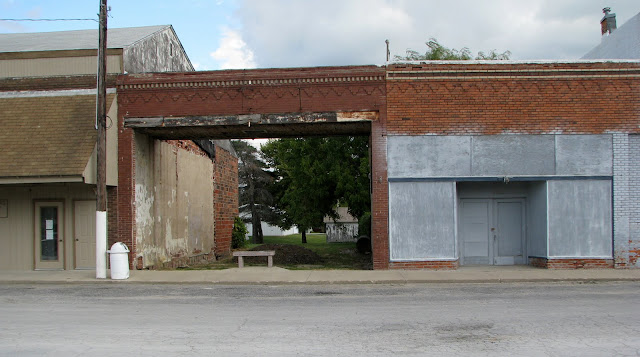 You are now viewing the east side of Murray, Iowa on mainstret.  The buildings are all empty now with no businesses in them.  To the left down the street is a remodeled bank which is still open.  The left building was a drug store with a soda fountain.  I ate many chocolate sundaes on twirly seats.  The opening is where the Agan's Barbershop stood.  I find it interesting that they chose not to take down the brick part of the building.  To the right was the hardware store.

My first cousin and her husband bought that store and ran it for many years.  It then became a movie theater for a number of years, believe it or not.   One more building sits to the right of this one that use to be a car repair shop and it was turned into a very successful cafe.  On top of that building is an apartment and above that still stand a lookout, built by the town, to watch for Japanese bombers, during WW 2. 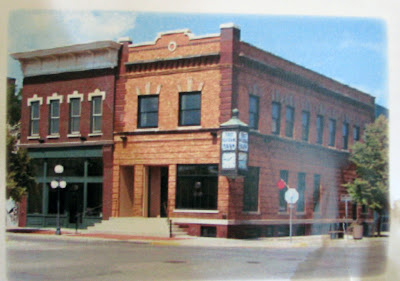 A couple of old buildings in Perry, Iowa.  They have both been refurbished and are in use today.  The corner building use to be a bank as you can see by the sign's design on the corner.  My wife and I displayed art on the top floor of this building about 7 years ago. 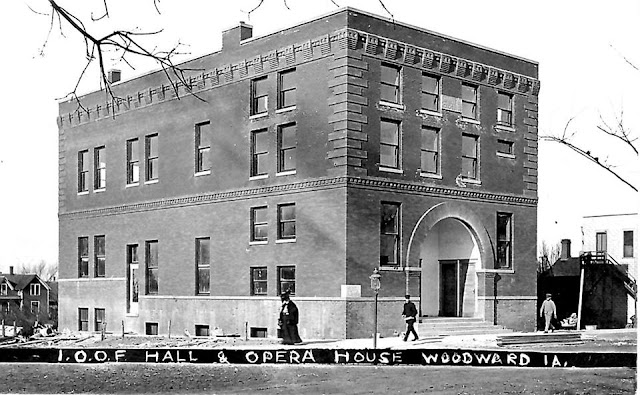 I have saved the best for last.  This photo is a building that stood on main street three blocks away from where I live now.  It looks like it was just finished in its construction in this photo.  I like all the different architectural influences in the design.  The banding design comes from Venice.  The Roman arch of course come from Rome and there are dentil designs along the top and smaller ones in the middle. They are all designs from overses older classical buildings.

The Oddfellows, a mens lodge, probably built the building.  They met at the top floor.  On the main floor was a stage with opera house seats both main floor and with a balcony.  It was said in the later years that a cafe was set up in the basement and served sandwiches all day.  Of course the people in the United States tear everything down.  The roof probably went bad and people who owned the building didn't have the money to replace it.  Fire codes of the 1960's probably were probably not being met.  It set empty for quite a while.

I moved to town in 1976.  The building was torn down in 1975.  What a big mistake for the city and for the history of Iowa.  I never saw the building but saw the very rough parking lot that was created after it was gone.  I find it difficult to find any info or more photos of the building on the net. I suppose it will take another generation of people from the town to start to send out the photos.

Check out others who are participating in SEPIA SATURDAY by clicking on the name.
Posted by L. D. at 1:59 PM 9 comments: