Facing the Future in Third Grade 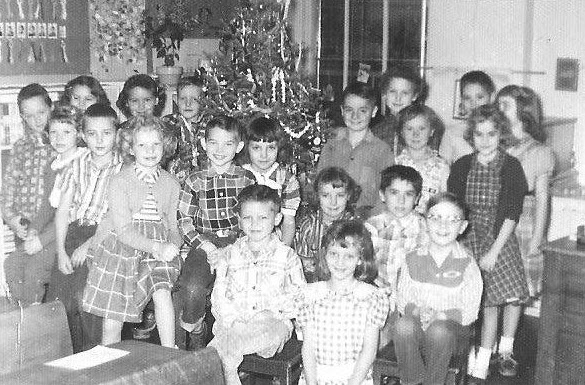 It is 1958 and this third grade class has finished decorating the little tree.  It is a real pine tree and the school has bought them for each grade school classroom in order to decorate for the holiday. The town is Murray, Iowa and it has a school with one class of every age in their building.   This group is being lead by Mrs. Thelma Thompson.

They are all such young faces not knowing much about what their future will bring. Three of the boys will end up in the service, two in the army and one in the navy.  Each one had a different destiny as one, Larry Gene, served in Japan, another, Bernard, was in Germany, and the third, Denny, was sent to fight in the Vietnam war.  The one who served in Nam ended up with addictions that probably shortened his life. He has been gone now over 20 years. The other two guys are close friends of mine living in the area.

Gary and Fred are still farmers today living near their homes of their childhood. Anna lives in Florida and was a realtor with her husband. Phyllis married a minister and lived in the southern states most of her life. One other girl who was widowed young in her marriage still lives in the Murray area. My one cousin Carolyn worked and lived most of her life in the neighboring town becoming the business manager for the hospital. My other cousin Jim has lived most of his years now in Arizona being a teacher like me. He and I were the only two teachers in the bunch.

Wilmer moved away the next year and I have no idea where he is today.  His brother married a first cousin of mine and I do keep track of his brother.  Ann lives in Osceola.  Mary Ann also lived in Osceola and was a hairdresser in her younger years.  She later became the manager of the country club of the golf course in town.  Mary Ann passed away just a few months ago. Patty in the photo married right out of high school and became a widow ten or so years later.  She is remarried and lives elsewhere from the home town. Sandy married early and she is a great grandma now.  She lives in the Ankeny area. On girl Barbara became a successful business person climbing to the be vice president  of a company.  She lives in Colorado and rarely returns to Iowa. She now promotes positive thinking and living seminars in her retired years.

In the photo is a guy, Larry, with a striped shirt and short sleeves.  He is by a girl named Kathie who was a step cousin to him. Their grandparents married and made them seem a little like family.  Kathie lives about 25 miles from where Larry lives and they never see each other.  I don't understand why Larry's mother let him wear short sleeves shirt to school in the middle of winter.

The social structures of school seem to be a tradition that isn't as strong as it use to be.  Students today move in and out of schools continually.  The group in the photo above, 15 of them, graduated together all starting kindergarten together. Because country schools were closing our class had three or four more people added to the class who also graduated with this group.

I have stayed pretty distant from the past group for most of my years and the last ten years have reunited with a lot of them. It is interesting to return to see people who still carry their original personalities and yet have moved on to live lives so differently.  We really don't know each other very well now but I guess the bond of our youth keeps us together.  Our 50th anniversary from high school graduation will be in 2018.  Some of the core group who still live in the area of the school are getting very excited.  Me, not so much.........I hope we are all still around.

Check out others who are posting in Sepia Saturday today.  Each post has its own twist to what the group is doing.  All of the post are very interesting posts. Click here on Sepia Saturday to check them out.
Posted by L. D. at 3:54 PM 6 comments: