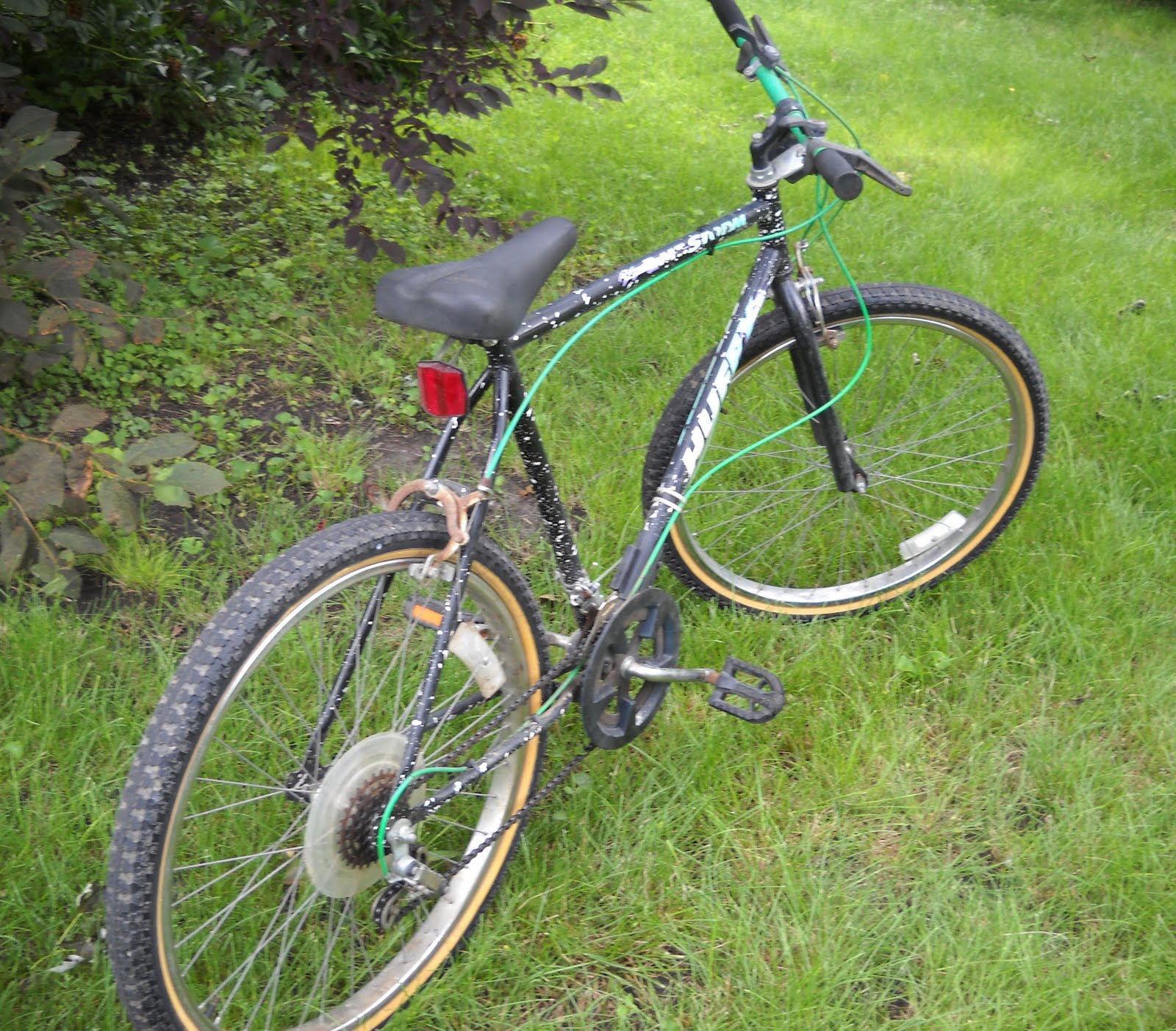 Following the theme today, sort of, I wanted to share the only few personal shots that I have with bicycles in them.  The above one was dumped at my garbage bin a few years ago and it remains as a decoration in my yard. I have ridden the bike and I definitely need to start riding it again. 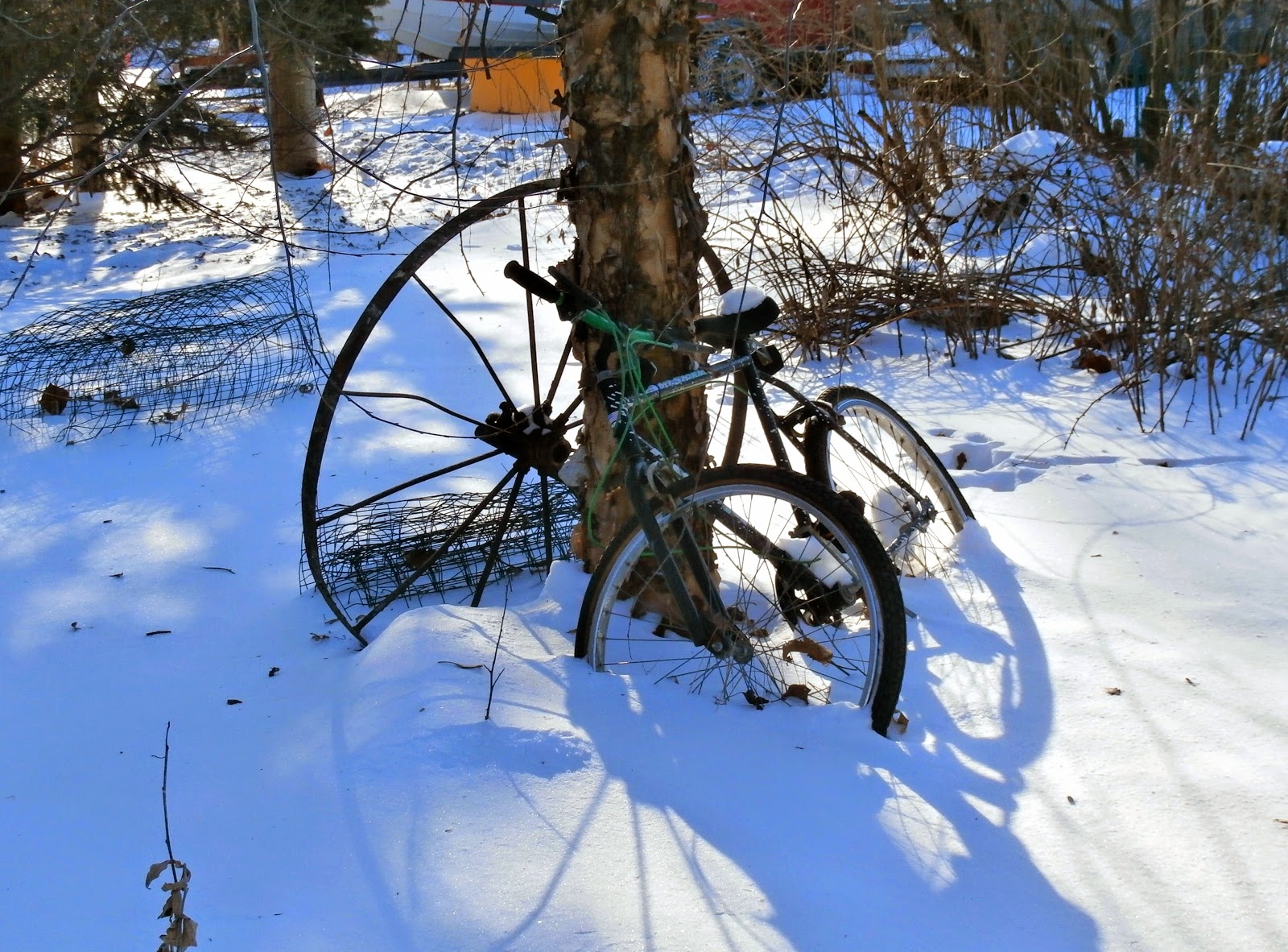 As a decoration it now has a new wheel added to keep it company.  It is an old farm wheel from a cart that I brought home last fall. 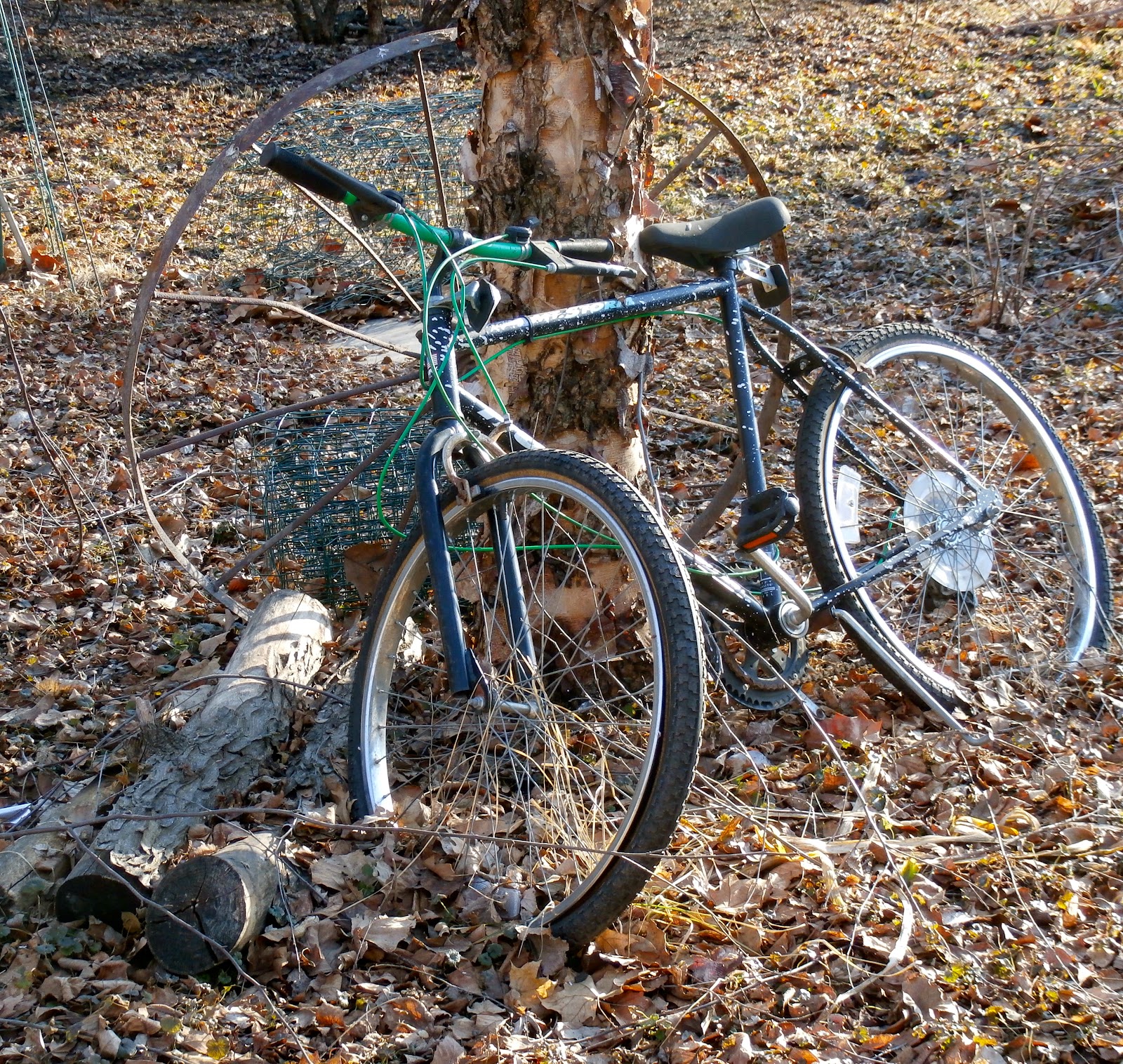 Here again is the scene that was taken in the fall before the snow started to fall. Our town has a bike trail that extends out of our town and goes east over an old train bridge.  The bridge in 13 stories tall and is now a major attraction for Iowa as people can take the trail for miles after crossing it.  Our town people are putting bikes out in their yards for decoration to help promote the High Trestle Trail Bridge. I have lived here long enough to remember the sounds of the train at night loading grain.  The rails were removed 10 years or more as all grain is now trucked elsewhere for shipping. The bike leans against my river birch tree even though I should move it closer to the road to make it visible for visitors in town. 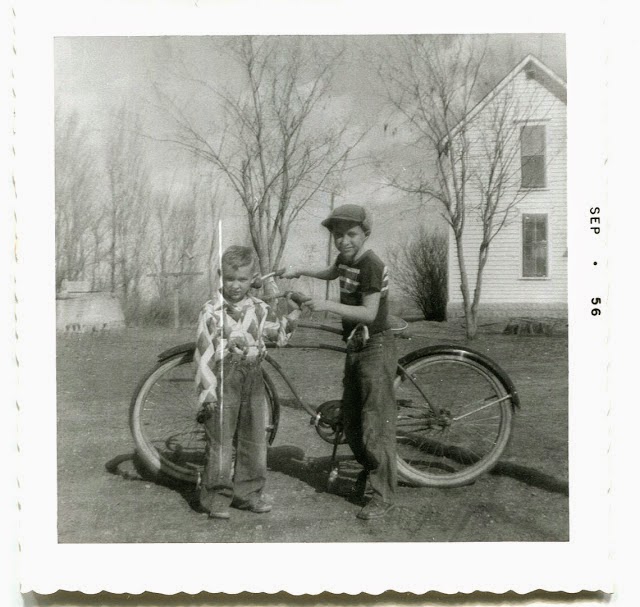 This is a photo of myself and my older brother Dwight. It is 1956 in Southern Iowa on our family farm. The photo was taken in the fall with our old farm house in the background.   I was  6 years old and in the 1st grade by this time and my brother would have been 9 and in 4th grade. I couldn't get on that bike as I was too small.  We both are wearing hand me down clothes as we have two older brothers.  I was wearing Dwight's old clothes in this photo.

Memories brought back from the picture included the two locust trees with large thorns.  You had to be careful to not walk under them without shoes.  The concrete structure is a cistern that my dad would fill with water from a farm pond.  The pond is south and water was pumped by a gasoline engine a long ways to be poured in to the holding tank.  The water was used for washing clothes and running the bathroom water.  Drinking water came from a well with me carrying the buckets of water to the house twice a day. I did that chore with glee but never understanding why the older brother never had a single chore. I guess I was too complying and should have rebelled a little.

Another memory was the wind break that was planted to help stop the northern winds from blowing at the house.  It really should have been made with evergreen trees as the stems and twigs of those kind of trees didn't block much wind.  The house actually sat on the top of a steep hill and it was a very cold house.  My room with my my older brother was the top window in the house.  It was the north west corner, the coldest room in the house in the winter. The house had no insulation it was never warm inside in the winter.   The house was torn down by family members in 1959 and a new ranch house replaced it.  It was a very warm house inside during the winter. 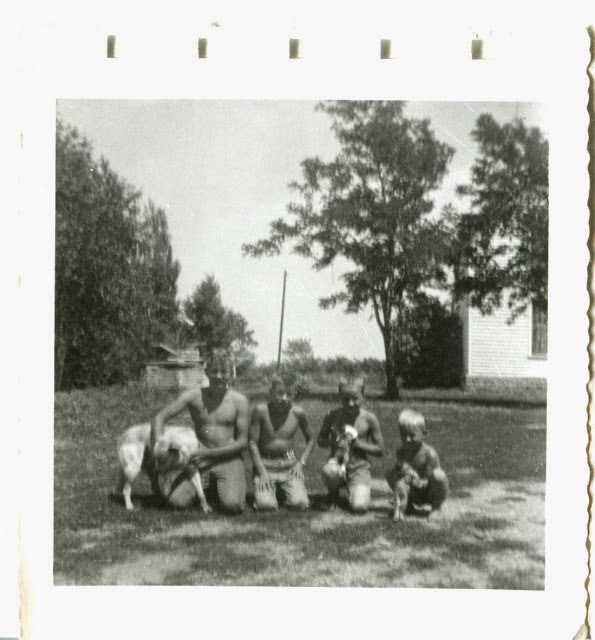 To follow with the theme of the last phot is the shot of me and my brothers when I was a couple of years younger.  We are sharing our pets to the world with the dog Tippie and two of the cats of the many that we had on the farm. From left to right is Rex Burgus, born in 1943, Ron Burgus born in 1941, Dwight Burgus born in 1947, d. 2008, and myself born in 1950. The oldest brother who is smaller, has lived most of his life in Mesa. Arizona.  The taller brother Rex has lived most of his life in California, near the Disneyland area.  Me of course stuck in Iowa all of my life. I do live in the north central part of Iowa and not down in the south anymore.

Visit others who are participating in Sepia Saturday and are sharing old photos and stories.  Click here to find your way to many great blogs from all around the world.
Posted by L. D. at 9:45 AM 8 comments: