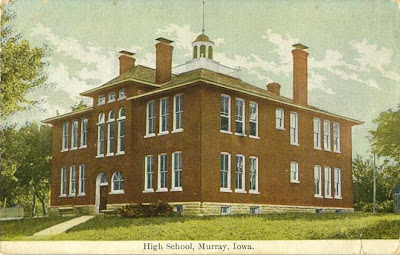 Thanks to the Penny Postcard site for sharing their photos of old.  The above building was in Murray, Iowa and was one of their first school buildings. The very first one was a wooden building this one looks like it is brick. I never saw this building and I am sure that it caught fire and was torn down. The history of these buildings usually met their final fate in that way.  I am not even certain of it's location in the town, but I figure a relative or two will help me to update that info.  I graduated from a different building in Murray that was built in the 1900's that sat on a hill that reminds me of this
location.


My cousin Joan Henderson Callison wrote me the following information:

The lst and 2nd schools in Murray were in the block kitty cornered northeast across the street from the present school.  Plans were being made for the present school when the brick one, pictured above, burned a month before school was out. It was thought that it was arson. They finished going to school in churches and business buildings.  Mom, Ruby Burgus Henderson and Mary Burgus Farr would have been Juniors.  Mom said that they had to ask the kids what their grades were because all the records were burned and the boys remembered them being much higher than they actually were. Mom and Mary were in the first graduating class of the current school in 1926.Grandma & Grandpa Burgus made Mom wait a year to go to high school so she and Mary were in the same class.

Structures like the newer one are of flat roof construction. The illustration of the Woodward building a few pictures down is typical of the early 1900's style of school building. The 1926 building that Aunt Ruby and Aunt Mary graduated from is the very same building that I graduated from in 1968, 42 years later. 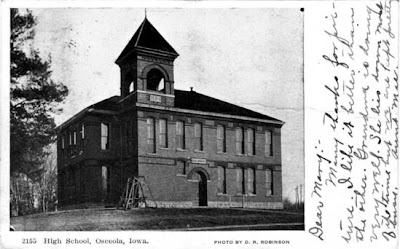 Another school structure that stood in Osceola, Iowa in the past shows the tower for the school bell, a carryover from the country schools who most had a tower structure built as the entry for the school and to hold the bell. As the country grew the families grew and I am sure this building became too small to handle the number of children in the town.

A structure that still stands today is the Osceola Depot.  It is still in use and the Amtrak train stops here frequently each day. When people are ready to board the train, they line up on the concrete slab and wait as a group for the train to slowly pull up to allow them to board. I don't know how fun that would be in a rain storm or snow storm as there is not covered area for them to stand. 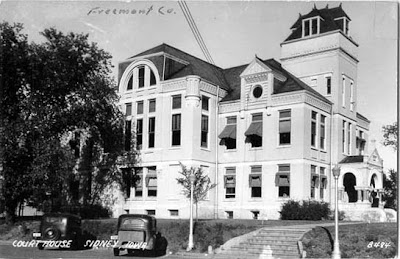 When I was first starting out as a teacher, I taught in Sidney, Iowa.  The county seat of Fremont County was Sidney and this is the courthouse that still stands there today.  The trees have all grown in since this was taken.  This is actually the second courthouse built here as the last one was destroyed by dynamite.   The border of Iowa is more than twenty miles away but during the Civil War, the southern soldiers didn't have maps.  They were sure that they were in Missouri so they placed explosive material inside the court house and lighted a match.

The Underground Railroad actually did go through Sidney in the 1860's. I do know that Iowa was against slavery but I don't think Iowa ever actually was attacked by the South except for this one time. 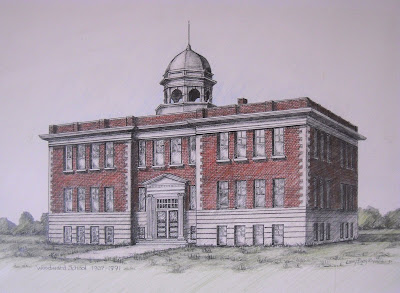 This is the Woodward, Iowa school building that was built in the early 1900's  Originally it was a Kindergarten through Senior building and the stories were told that the bottom floor was left with a dirt floor for it's early years. The school children went down there to play during rainy days for recess.  I am assuming that the money was tight.

I do know that they later finished the floor as I taught my first four years in this building. I was in the basement room with a concrete floor.  It is the one with the right back basement windows. I started teaching there in 1976.

The cupola was said to have blown off in the 1920's.  Do you notice all the Roman influence on this structure with the pediment over the doorway and the water line base that reminds one of Venice, France?

As with all older structures in this country we tear them down after 100 years.  It was taken down in 1993 to be replaced with a single story building.

I am off theme most every time but maybe I can dig out my Grandmothers old cookbooks and create a food theme for next week.   I seem to be behind on themes or never conforming at all.  I enjoy all the themed blogs and you can see more blogs who share in Sepia Saturday by clicking here. 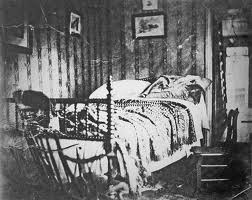 I was watching an old PBS special about the Civil War in the United States.  They covered the shooting of Abraham Lincoln by John Wilkes Booth at the theater, showing old photos and the present day historic site.  Also they described what happened after the President was shot, saying that they took him across the street from the theater and placed him in a randomly chosen boarding house room on the first floor.  They laid him out on the bed diagonally because he was too tall for the small bed. There he lay being attended to by doctors who had none of today's technology to really give him any hope of survival. 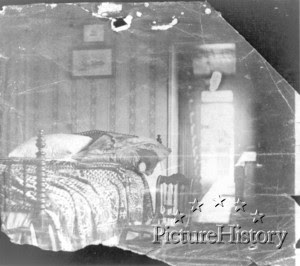 They didn't ask permission of the man who had rented the room and since he was gone at the time,  I am sure he was surprised to find the government officials had taken over his room when he returned to the room. From my memory of things Abraham Lincoln didn't die from his wounds until a day later.

The thing that jumped out at me was the chair that was sitting in the boarding house on the right side of the bed. It had a caned seat.  I own a chair like that one in the photo, at least I thought so. 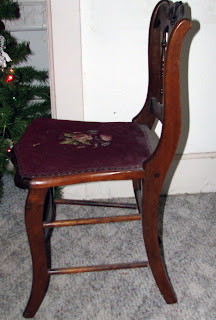 It is the same style of chair.  This chair did have a cane seat in it originally and it is the same shape.  I looked at other views of the chair in other pictures of the bedroom and it is from the same family of chairs but it is not the exact same kind of chair. 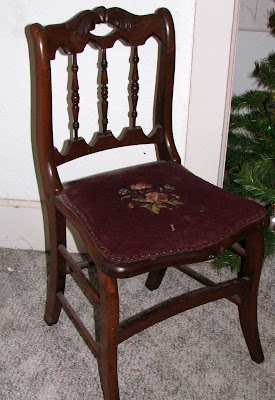 My chair has been stained mahogany and I am sure it was originally a light or medium brown wood.  From other views of the chair the side supports and bracing are all the exact same. The three spindles are the same in the back and the carved arches are the same. 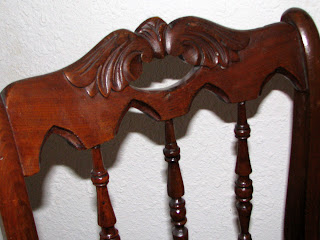 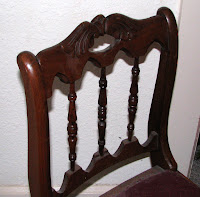 I bought my chair at an auction in Sidney, Iowa. The woman who had passed away had an antique business in Omaha and a lot of things she kept at her house were antique.  I doubt this was a family piece but I suppose it could have been. The cross stitch piece really does look great on this chair even though it is covering up the cane seat opening.

I paid six dollars for it which was not a high price at the time in 1974. I assume that the crowd really were looking for more modern furniture.  I also bought some Wedgewood pieces at that sale for three or four dollars a piece.  The auctioneer was not much with selling all the small items so he let me bid the per item bid and then said I could take as many as I wanted.  There was an ashtray that I didn't take at the time but someone else certain grabbed it. The chair seemed like a wonderful item and would make a great desk chair to an antique desk. 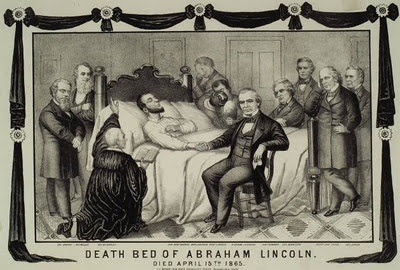 Just for fun I am showing you an artist rendition of what he thought it might have looked like while Mr. Lincoln lay dying.  The artist has taken artistic license on the looks of the chair in the illustration.  I assume the artist would not think that people could someday get on the internet and view that actual chair in 1865. As small as the room was I really doubt that there could have been that many people in the room.

I probably will continue my research about the whole history of the company that made the chair.  I have found numerous sites that show the room which has been kept as a museum.  It was a very small room and the shooting or our president was a sad part of our history that will always be remembered.

Thanks for stopping by my blog.  Check out others who are participating in Sepia Saturday by clicking here.