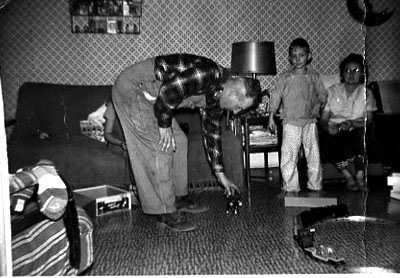 I am guessing that the year is 1957.  My brother Dwight and I received a new train together from Santa Claus.  My dad had a windup toy metal donkey.  It had a tail that would spin making the donkey shake and move in circles.  We were poor and it kind of shows.  The old rocker in the foreground recovered with towels. The saggy couch in the back and a line up of old rockers on the right. The linoleum floors reminded me that the marbles rolled east to west when released.  The house was an old house with no insulation and it sat on the top of a hill in southern Iowa. When the wind would blow the house would be cold through and through and sometimes frost would form on the wallpaper.

My dad had hair and it was dark.  My mom had the same hair style most of her life.  My older brother Dwight is behind my dad, barely showing. I am standing around watching my brother take the photo. A camera was a pretty fancy thing for our family at that time. This must of been the year my oldest  brother Ron got a Brownie camera for Christmas.  He would have been the one taking the photo, using up those expensive flashbulbs that would be like an explosion in a glass ball. I don't know where the one other brother would be during this time. The wooden shelving thing on the wall full of photos and salt and pepper shakers is in storage in my basement today.  I really think this is the only Christmas shot that we ever took my whole life time.

Check out others who are sharing their blogs about Christmas things. Click here on Sepia Saturday here and find a lot of fun spots to see.
Posted by L. D. at 3:55 PM 4 comments: