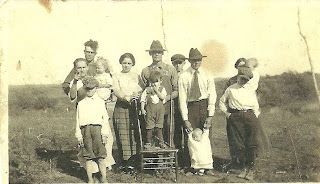 
The longer the time passes while doing Sepia Saturday, the more I am finding photos of Great Grandmother Carrie Maxson Brown Driver. She was talked a lot about by my mom and also my Grandmother who was her daughter in law. She first married my Great Grandfather William Brown. When he died she remarried a Thomas Jefferson Driver.
I want to do a very thorough blog about her but not today. I just want to share this photo. She is the woman holding a child and pointing to the camera person, probably trying to get the little girl to look toward the camera. Carrie Driver had two sets of family and the second set had the the two daughters which are probably in the picture with their husbands and children. One daughter is not really in sight in the photo The daughters names were Ida and Florence. If I count out the husbands there is an extra guy who must be one of the three sons, either Glen, William or Jesse.


My brother was visiting our Uncle Kenny in Murray, Iowa and he had a portable scanner. Instead of dumpster diving he was doing large photo box diving. He scanned a lot of new ones for us to see of my mom's side of the family. He also scanned some non relatives. The guy above looks like he graduated from high school and he is an unknown, not our family lineage. He could be someone's neighbor's grandson or nephew.  It is a fancy folder presentation and I can not make out the photographer's name embossed on the front. It looks like Gulander. The name Sevier is a French name.


Another wonderful old photo which is probably a non relative. This is Vettie's older son as it is written on the back. My Aunt Sylvia was from Czechoslovakia and the name of Vettie doesn't seem German or British. I have visited with cousin Bob her son and he doesn't know the origin of it.  I believe this is one of my most favorite old photos of all that I have seen so far.

Visit others who are participating in Sepia Saturday.
Posted by L. D. at 8:29 AM 4 comments: 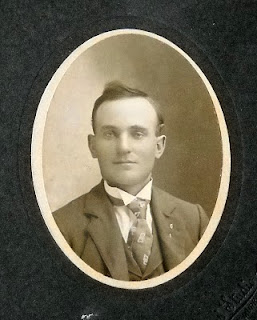 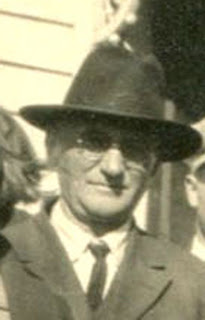 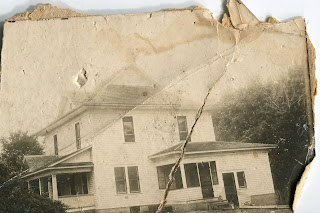 I found this photo among my parents things and it is the house that my Grandfather Charles Burgus built. It stood northwest of Murray and was built in the early 1900's. Their first child was born in 1902 so it had to have been built years after that. I don't know that much about the place. They had ten children and they sold it and moved to another farm nearer Murray. The main reason, I was told by family members, was to move closer to town so the older girls could go to high school there. My grandfather actually bought two different farms after he had sold the one on which this house was built.

I have many questions about the place as my grandfather had 12 brothers and sisters and I wonder if any of them help him to build it. I wonder if his own dad, my great grandfather was alive and helped with the job. I really can't believe that he would move out of it but I guess when they moved the older children were moving out and they would be able to go to a smaller house. A lot of these questions will go unanswered as all ten of the children are gone now. The house itself was a traditional style that was built back then but also it reminds me of the ones Sears and Roebuck sold in kit form. 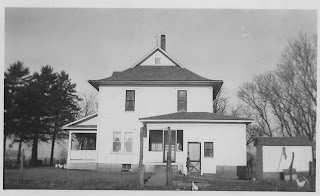 I don't know the date of this photo but it is later in time and newer than the photo above it. This photograph looks like it came from a Kodak camera owned by one of the family.

My first cousin Joan tells me that the house has been moved into the town of Lorimor. I will either have to get in contact with friends in Lorimor, or go over there myself to see if I can find it.

Another task that I realized that I must do is locate some dates of birth and deaths of my Burgus grandparents and great grandparents. I have found so much out about my mom's side this past two weeks that it is overwhelming. I am glad to discover the family tree and it just makes you become more anxious to find more.

Visit other bloggers who are participating in Sepia Saturday by clicking here.
Posted by L. D. at 12:35 PM 8 comments: 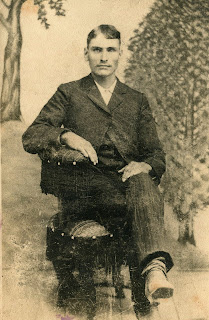 My grandfather LeRoy Martin Brown was three years old when his father died. No information is known about any of it but I have relatives who are looking for his father's grave in Illinois.

Charles W. Brown married Carrie Rosella Maxson from Fulton county, Illinois, in 1983. They had two sons, LeRoy, my grandfather, and Ira Brown. In March 8, 1888 five years after they were married, he died. My grandfather LeRoy was three years old. Again the past two generations say he is buried there but it is not known where.

I know nothing more about him other that what I just stated. Because of his early death, my great grandmother remarried and gave me many half relatives to keep track of in my family tree journey. I will have to blog about her another time as Carrie remarried a guy name Thomas Jefferson Driver. I have quilts that she has made and I have a lot of material about her five other children.

As a final comment, I wanted to note the background of this photo. It probably was taken in the state of Illinois and the mural is a hand painted effort. On the back is written in cursive the word Woods. I will probably never know what that means but I will always keep in buried in my little grey cells.

Check out all the others who are participating in Sepia Saturday this week, by clicking here.
Posted by L. D. at 9:14 AM 11 comments: 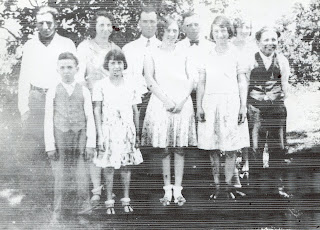 My first cousin Joan shared this photo with me of the ten Burgus children of Grace and Charles Burgus. I know it isn't in great shape but the character of it is grand. Most of the photos that I have of this group had been taken when they are all adult sized people. This photo helps to show the age differences as the three youngest are really young. At this point I am not going to share ages or dates of death as that isn't the purpose of this post. All of them have passed away with the last three being gone in the last 12 years.

Front row are the two youngest children of the family Donald and Doris, twins. Their older sisters Mary and Amye are next with the silly guy on the end being my dad, Jesse. He was third from youngest. It is a silly picture of him and I really think he is about 9 or 10 years old in the photo.
In the back row I believe is Ralph, Ruby, Carl, Cecil, the oldest, and Eva. I had never really noticed that the young twin boy grew up to look like Carl. Carl went bald early though and Donald the younger one really didn't have the same hair.
Eva in the back row, far right, is the Aunt that I am featuring today. I have only this one photo below of them. 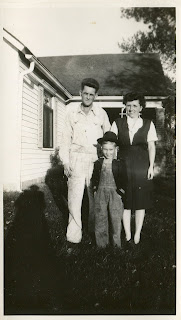 Eva Burgus married and became Eva Dovenspike. Her husband was Dick Dovenspike and they had one child name Charles.

My first memories of them were when we would visit their home for Burgus dinners. I was probably 7 or 8 years old. They lived near Lucas, Iowa an old coal mining town. They owned a home on the side of a hill back in the woods on their farm. They were good people and they had a nice home inside, but Dick wasn't too concerned about image. So their house was a one story home covered with black tar paper for it's siding. The farm house actually sat in a valley where Native American Indians wintered probably 60 years before then. They found so many artifacts in the valley in the cornfields.

Dick couldn't make a living at farming so he became a carpenter and worked most of his life building and renovating homes. His glasses were always covered in splattered paint.
I said earlier that they were good people but I do remember Dick holding his pipe, clenched tight in his mouth and he had a gruff outlook and personality. It was strange to have a grumpy one among all the Burgus clan but he was just that.

Eva and Dick eventually built a very nice home on top of the hill and lived in a very modern home. He did all of his own work as it was his trade. Eva was very good at growing plants and flowers and when you arrived to the door of their home their would be lush plantings of begonias blooming profusely. It was a jungle. It was said that she was a lot like my Grandmother Burgus but I think most of he daughters were in personality.

I don't know too much about the whole life of my cousin Charles. I do remember him at his wedding with his wife to be Helen and they did have three daughters, Kathy, Julie and Becky. Since they lived over in the Lucas and Chariton, Iowa area they were not seen much other than a once every two years at a family dinner. I really think the he was a carpenter also but I don't know that for sure. Charles finished his life much like my brother did with addictions that eventually took his life. He was an extremely bright man and played a guitar. Country music was his style. His wife divorced him at the last of his life but Helen has been so good at keeping track of her kids side of the family. We see her at funerals and visitations.

The last of the memories of this family are of where the three of them are buried. I attended my Aunt Eva's funeral probably 20 years ago and her body was buried next to her husband and son on a hill overlooking a southern Iowa treelined valleys. They tended to live the back woods life style and they chose a place in the cemetery on the edge of a steep hill with trees everywhere in the cemetery.

Click here to visit all the others who are participating in Sepia Saturday.
Posted by L. D. at 8:23 AM 10 comments: 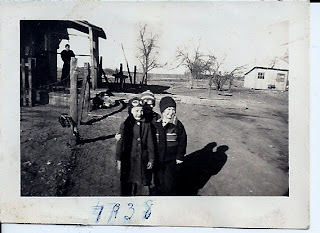 These are cousins from the Madison County area in Iowa. At this point I don't know who they are nor do I know who the woman is standing on the porch. The photo is one more picture that has the chicken house in the background and the taller old tree in it.  I have many photos of my mom and her brother or other cousins standing by that disfigured tree.  It probably is a great Uncle's farm place but there were six of them in that family, so which one could it be?

It is a mystery that my cousin once removed and I am working on.  I will have to do some digging and cataloging and see if the site can be found on one photo. That is all it is going to take to figure it out.

Check out the others who are participating with Sepia Saturday by clicking here.