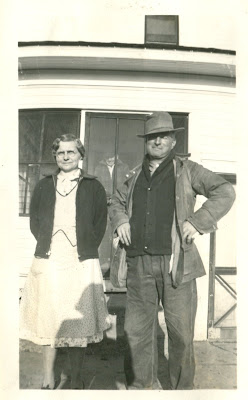 This is not an American Gothic painting like Grant Wood's painting,  but it could be.  They all had the tendency to bring them outside for the good lighting and stand them on the front stoop right in front of the porch.   In this particular photo you also get to see the older son peaking through from the screened porch. I do think the shadow is the shape of my mom taking the photo with her box camera.  I now  have a photo of her with that camera which I will share in a later blog.

The date of the first three photos that I am showing come from a photo album of my mom's which I date around the early 1940's.  It has photos in it that I can sequence for a couple of years in relation to what is going on with my mom and dad's life at that time. The early photos in the album show my parents dating and the back of the book shows by oldest brother while young, making it a time spam of at least two years.

I wanted to guess the identity of couple but they I don't recognize the children.  It confuses me as they have similar features of some of the relatives.  The people who I thought they were though did eventually have four or five children but they didn't have two boys.  I guess they really could be neighbors. 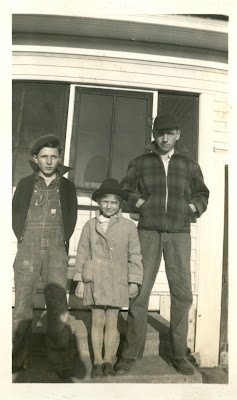 Here are the kids all lined up for show.  The tall boy is the one you saw on the porch peering out at the camera in the first photo.  It must be fall as they are dressed warmly for cool weather.  I also noticed the clothing of the mother in the top photo.  She has her apron on on top of the dress and then a jacket on top of it all.  Women wore their aprons from morning to night on the farm especially of that generation.  My grandma had her apron on all the time and my mom didn't wear an apron except the pretty ones for card parties. 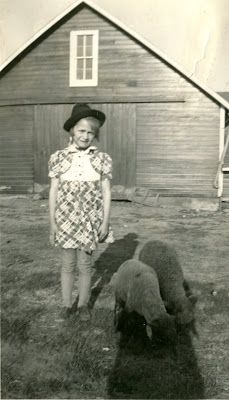 The little girl gets her picture taken again with the new lambs on the farm.  I am sure they were showing them to the visitors and the photo got taken.  Maybe as some of my relatives on my mom sides see this blog that maybe they will be able to identify them.  I know they are not from my dad's side of the family. 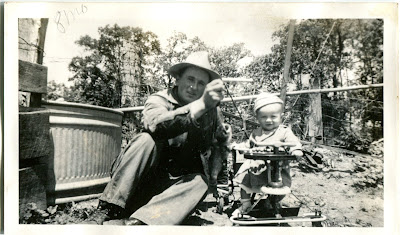 The privileges of being the first born includes being place anywhere and everywhere to have your photo taken.  This is a photo from the album and it says that  my brother Ron is 8 months old.  He was born in October 1940 which makes this photo to be June of 1941.  My dad Jesse had not been drafted into the service yet but will be very soon in the next couple of months. I remember that child's seat as I think all four of us brothers were put into it when young.  It was around still in the store room when I was five or six years old and I am sure it went to the dump sometime after that when they cleared that room for making a bedroom. 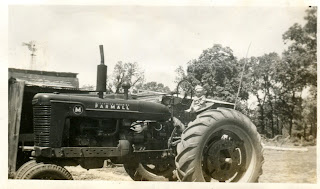 My brother Ron again the same day sitting on the Farmall tractor.  I don't know whose farm this is and the clues are few for me to figure it out at this time. The possibilities are numerous as all the relatives were farmers.


Check out the others who are participating in Sepia Saturday by clicking here.
Posted by L. D. at 12:43 PM 10 comments:

The Train and Change in America.

As a young country the United States had no infrastructure for transportation other than river ways and Native American trails. The means to explore the country consisted of walking and riding on horseback.  As the country developed,  hand carts, ox carts and wagon trains trudged west through wilderness and plains, discovering the necessities of food and water as they traveled.  The wagon trains eventually created their own roads that one can still see evidence of today in our country.

The train made the major change to the advancement of the settling of this country.  The earliest trains were steam engines that were small but mighty.  The size of the steam engine grew with the need for more cars for passengers and freight.

The movement of products, mail, and passengers advanced the settlement of the country much more quickly in comparison to the years by wagon train and horse drawn wagons. As a young boy in the 1950's I can remember the use of the steam engine as it crossed Iowa going from coast to coast. Today the Amtrak carries people coast to coast but the majority of the time we see freighters carrying coal east for the creation of electricity.

Steam engines were replaced in the 60's by diesel engines.  During my lifetime the train was eventually replaced by different passenger transportation and the trucking industry advanced and now dominates the shipping of products.  Along with shipping by air, the train has almost become obsolete.  Railroad track has been removed and the beds turned into bike trails.  In some cases it seems they were too easily removed and the wish for some of the track to be put back would be now too expensive. 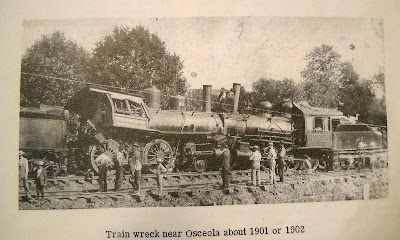 Accidents did happen as the cell phone and other communications did not exist.  Swinging lanterns or red and green lights back and forth and waving flags were the means of communication between people and trains. 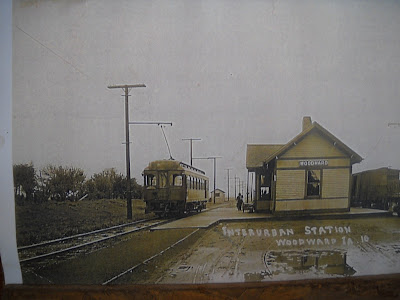 The electric powered engine was a trend for a while as the trolley traveled throughout city streets, tied to their electric connection.  Above is a trolley that was standard transportation for thirty years or more to the town in which I live to the city of Des Moines.

There are so many factors that change the way we live and many causes that have changed the way we live.  Sometimes the changes were for the better and other times they seemed to be an experiment as we transformed a good idea into another better idea or even into a not such a good idea.

The people have changed too as the necessities of life seem to be less of a necessity anymore but more of a luxury.  Our level of poverty has changed from no running water, food and heat to poverty being not having a big screen tv or two or more cars.

History has always been a fascination for me and the cause and effect factors are too many for me to give out a very factual post.  Being aware of the changes I guess is an appreciation for me of where we are and where we have been.

Join others who have created posts on Sepia Saturday by clicking here.
Posted by L. D. at 1:50 PM 7 comments: