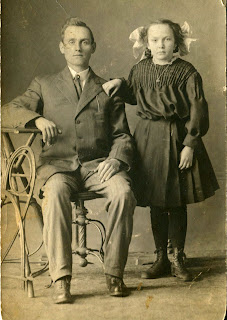 This first photo was a postcard photo that was labeled Marie Brown, Lewiston, Illinois.  My mother has written on the postcard saying that it is my Grandfather Leroy Brown.  The girl is an unknown to me.  All written history says that my grandfather and his brother were the only children born before their dad, my great grandfather had died.  Leroy was 3 years old at the time.  His mother remarried and he and his brother became half brothers to a family with the last names of Driver. My mother said on the side of the postcard that the Marie Brown was her namesake as my mom had Marie as her middle name.  It makes me wonder if she died young as I have never heard of anything about her ever.

I have work to do to find out if it could have been Leroy's niece, his older brother's daughter. I know nothing about that brother. but it would have been the only way she could have had the last name of Brown.  In the photo my grandfather looks very young and is still living in Illinois.  It is said that when that family left Illinois that they moved to one of the Dakota's where they experienced a drought.  So they traveled to Iowa.  I can date the photo at about 1880's as my Grandfather married my Grandmother in 1913.   Leroy died in 1937. 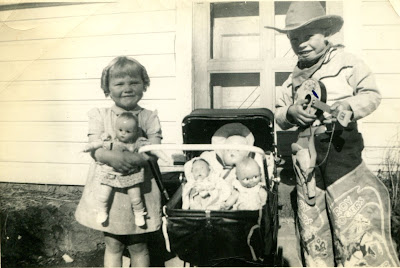 A bonus picture from American culture.  I don't know who is in the photo.  I suspect it is two of my Great Uncle Lee Wheeler's kids.  He had one boy and three girls. What I like is the little girl with all her dolls and the little boy with all his Roy Rogers attire and banjo.  The photo says January 1948.  I too will work on this one to find out who it actually is. I really think they are Madison County relatives, cousins.

Click here to visit all those who are participating in Sepia Saturday with me.
Posted by L. D. at 4:36 PM

I enjoyed this post very much. I bet those children were happily posing with their Christmas presents in that second picture.

Those kids are darling...whoever they are. What a lucky little girl to have so many dolls and lucky to have such a well dressed brother. I remember loving Roy Rogers, even though I was a girl. You can go to the Roy Rogers museum and see a stuffed Trigger. It's somewhere on the road from L.A. to Las Vegas.

Great pictures, both of them. I am really curious about Leroy, because in both pictures (the earlier post and this one) he looks so serious and stiff. You obviously didn't inherit that! But I guess I wonder why he was so serious or if he did sometimes smile and let loose a little.

Love the photos! So you might be related to "Bad, bad, Leroy Brown". The dolls are beautiful and the cowboy is priceless. I have a color photo of my husband in a cowboy outfit which I will post one of these days.

Yes, I never knew Leroy. His obit says he had many friends and was loved by all but I think that was a standard statement papers liked to print. My one brother and I talked once and we really think he could have been a shifty character. He dug graves in cemeteries and did odd jobs. I don't have a single happy picture of him and the brothers and sister of my grandma never would give us much information. My mom really never talked of good times ever in family life as they were extremely poor.

Two fabulous photographs Larry. As for the mysteries and the digging that still needs to be done - it's half the fun of it isn't it. Get that paper out, start drawing inter-related boxes and arrows, pit the pieces of the jig-saw together.

I love a mystery and with family histories there are always mysteries to be solved.

Wow, two great pictures--but that second one is such a classic of the postwar years; & what a great toy banjo! Fascinating stuff.

Love that cowboy outfit. Very nice post. Thanks for visiting my crazy blog.

Wonderful pictures! I especially love the kids and their toys!

Two very different photographs. I hope you solve the mysteries! :)

These are precious photographs. I wonder if you can find Marie Brown in a Lewiston, Illinois, census. I hope you can find out who these individuals are.

Again great photos and a blessing to gaze at with wonder. Your great grandfather was a handsome man. The girl doesn't seem to resemle him yet there must have been a connection to be photographed together. Doesn't it stir the curiosity?
The two children were REAL children, unlike many today who seem miniature grown-ups.
She was a mother in the making pretending she had real babies and he was King of the Cowboys.